Wow. Watched Zsazsa Zaturnnah Ze Muzikal last Sunday. It’s the last staging for the summer. It’ll be back in June for a limited run at the CCP as a more “interactive” version (will they pull audience members to sing or dance along, I wonder?). It was great to see Carl V’s work translate well to this colorful and energetic medium.

We sat a decent distance; the isometric view of the stage and the performers wasn’t bad. I wish I bought the souvenir program because I can’t remember some of the other actors’ names (am a cheapskate sometimes, I know). I especially liked the performances of Eula Valdez, Kalila Aguilos, and Joey Paras, who played Didi. He was real funny, and some of his ad libbed lines really cracked us up. I like how the fight scenes were conducted too, as they were cleverly staged with just a few fancy props and ably choreographed footwork. 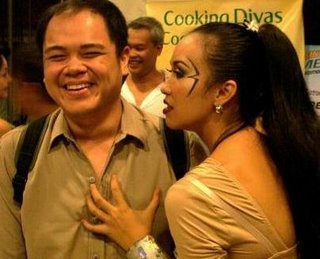 Benedict is regretting that he didn’t zoom out the lens, while Kalila Aguilos (who was super awesome as Queen Femina!) had her bent left leg posed over my body. Sayang! It was so cool of her and the other cast members to pose with fans after the show. 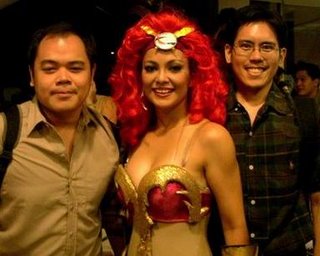 Eula Valdez was a surprise. Did she start with Bagets over twenty years ago? Oh my god, she was electrifying as the female superheroine alter-ego of the parlorista . I didn’t know she could sing. She was shapely, too; she wore a body stocking from the belly down, but it fit snugly around her t-backed posterior and kinda cast the illusion that it was bare. Anyway, I look asleep in this shot. Unholy pope Benedict is smiling. 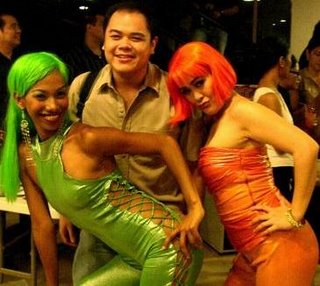 Wilma Doesnt and Deeda Barretto were half of the quartet of the Queen’s henchwomen. I really enjoyed their song-dance-and-drama clashes with Zsazsa.

And the Geeks Shall Inherit the Earth 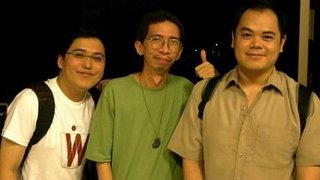 Jolography author Paolo Manalo, Penumbra books author David Hontiveros, and moi, after the show. Saw and greeted Ian Carandang and Sam Kamada too, as well as UP professor Eric Manalastas. Everyone was happy. 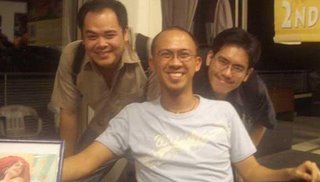 (pic from Zsazsa groupie Paolo M., who watched it for the tenth time!)

I saw part of an episode of Nip/Tuck last Saturday. It had a masked stalker guy called the Carver. Heh. Anywaze, congratulations to the one, true Carver, as well as the dedicated cast and crew. It was a unique, fun experience, and may the movie star all these hardworking, talented actors. I didn't notice the whole thing was about over two and a half hours. I hope they make it a movie musical, but compressed below two hours. Dave says it can actually happen, because, well, you never know. It's going to be a Regal film, after all.

Is it still showing?

The CCP shows will be on June 16, 17 and 18, I think. Will announce the schedule once it's confirmed. Thanks for visiting. :)