Two hours ago, I waded through ankle-deep water. Haven't felt that icky feeling in a while. The last time my feet got wet that way was way back in college. Really gross. I didn't wanna think what kind of germs clung to my feet. When I got to the mall comfort room, I drenched my feet in alcohol. After running some errands, I rushed back home and cleaned up.

My poor rubber shoes. And socks. And pants. Well, it's still nothing compared to the crappy feeling brought about by Manila floods. I remember they can actually submerge people up to their thighs. The disgusting muck can rise above your crotch area, if you're vertically challenged. Thankfully, I'm not.
Posted by OLIVER at 6:55 PM 4 comments:

Good that I'm busy with work and other stuff again. I may panic sometimes when I feel extra-pressured by deadlines, but miraculously, I get the job done. I'm drawing again when I can, which feels liberating, especially since it's not work-related.

Watched Big Time a few hours ago... all I can say for now is, watch it when it opens this Wednesday! Cool, darkly comic heist flick. Gah, I'm speechless 'cause I'm sleepy... Anyway, thanks, Vives for the shirts and for the invites!

Also earlier, I got a DVD of Angels in America and some great-looking Rome calendars from the PR firm handling HBO and Cinemax. If you're reading this, Virtusio family, thanks for the nice gifts!

All-Star Superman # 2: Awesome! Refreshing! Grand! It feels a little like Alan Moore's Supreme issues, but it's its own clever and entertaining creature.

All-New Official Handbook of the Marvel Universe A-Z # 1: Handy new trivia! A sourcebook series that will run until December. It's great that obscure characters are being featured now, like in the OHOTMU's of yesteryear.

Essential OHOTMU: Speaking of, this black and white, phone directory-thick tome compiles the first 15-issue series from the early '80s. I wasn't too happy at first with the thin newsprint stock, but it fits the whole idea of being reprinted; its texture elicits a nostalgic feel, and it makes the whole thing more affordable despite its bulk.

She-Hulk: Issue 3 was great, even if there was a weird and jumpy mix of artists. Issue 4... it's a heartwarming tale, but the art is distracting. Actually, it's kadiri.

Infinite Crisis 4: Major spoilerage! Great, great issue... 3 issues na lang! I really hope that they'd somehow explain Hypertime/The Kingdom and Zero Hour here, because they're really big cosmic events that supposedly show a broader or retooled picture of the DCU. With the possibilities presented by Hypertime, they (Alex and company) could've just left the current DCU earth/reality alone. In Alex's search for the perfect earth, couldn't he have peeked into that dimension opening or whatever it is to get a place that would fit their needs? I know there's no drama in that, but I'm just curious. Obviously, there's more to Alex and SB Prime's insanity than meets the eye.

As for the SB Kon-El/-Titans versus SB Prime battle... Oh my god!!! That was really violent! I can't believe they actually showed Risk's arm getting torn off! I just checked, and noticed that IC isn't carrying the Comics Code insignia unlike JLA and other titles.

Wally and family... I dunno, their "removal" feels a bit forced. I don't believe they'll be gone forever too. But having Barry, Max and Johnny Quick appear was a nice touch.

Bludhaven! Crap!!! That was cool and shocking at the same time.

And, yeah, it was funny when SB-Kon-El quipped, "Say what? That I can't believe you're wearing your underwear that tight?"

From singing editor Pam Pastor: “Help my band MOZZIE get 2006 off to a rocking start. We’re playing a quick set at Motorsports Alley (Katipunan cor. Boni Serrano) again on Saturday, Jan. 21, 8 p.m., along with other bands. Excellent tequila slush, totally laidback vibe, wear your pajamas if you wish. Hope to see you there. :)”

Gerry Alanguilan will be releasing the first issue of his Elmer: The Ultimate Chicken Story this April.

Carl Vergara’s Zsazsa Zaturnnah is now a musical! Check his blog for the sked.

Arnold Arre sent me a teaser ad of his latest graphic novel, which is expected to be in stores soon. Check his site and Cynthia Arre’s journal for further details.
Posted by OLIVER at 1:37 AM 2 comments:

Fellow comics and toy fan Benedict (who’s still stunned that one of his favorite titles, Spider-Girl, is ending with its 100th issue in a few months), took these pics of my action figures last Saturday evening. Prior to this, I found some interesting back issues of Dazzler, Iron Man, and Vision and Scarlet Witch at BMP, and I got two wonderful new mix CDs from Gumby.

Here are some toys that I slowly collected over the past couple of years. Yeah, obviously, I open them up and display them. Some of them were loose figures. Click on the super-group pics for bigger images. 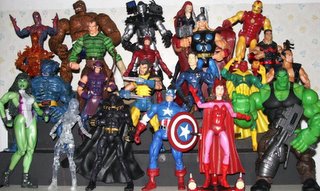 I’m pretending the Human Torch (below Spidey) is the android Jim Hammond, instead of Johnny Storm. And I put DD in because he’s practically a member anyway, even if he did politely decline “fate” (quotation marks-hand gesture, a la Jessica Drew). The 2006 Marvel Legends will be sweet… Moon Knight, Quicksilver, Wasp… Oh, I nearly forgot... it wasn't intentional, but Iron Man looks a little drunk. 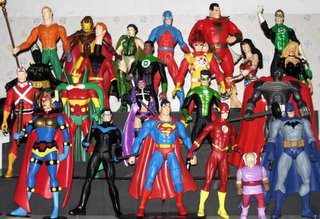 Barda kicks ass. I want a Martian Manhunter, a Zatanna, and a Hawkman… I need moolah…

We were quoting lines from Buffy and mimicking Spike when we took pics of these two… sayang some of the nicer poses we did of the pair were blurred. Ngek. These nice toys resemble the actors, unlike the Faith fig, which looks nothing like Eliza Dushku.

Where Have All the Mutants Gone?

X-Men: The 198 Files is a fun read, a one-shot special that compiles a list of characters that the Office of National Emergency (of Marvel’s US Government) is keeping track of. These are the confirmed, surviving mutants to date (there’s this big event happening in all the X-titles right now, if you haven’t heard). It’s got short bios and power descriptions, as well as small, previously used illustrations of all the remaining heroes, villains, and civilians (I wish they’d do new, exclusive art for these sourcebook-type titles, but ehh). There are three characters per page, and it’s info-taining, but the dark blue-colored “links” are hard to read; one still has to tilt the comic book at a certain angle. Here are some of my comments on the contents:

1. Squirrel Girl is only a low-level threat? Come on. She defeated Dr. Doom, M.O.D.O.K. and Thanos! GLA is a humor book, I know, but she should’ve been considered a high threat. It did mention that she beat Dr. Doom.
2. Mr. Sinister isn’t here, so he’s depowered. Doubt it… but the baddest big bad an ex-mutant? Hmm. Wonder how that’d go.
3. Artie Maddicks isn’t here! Yay! Unless the poor kid’s dead already.
4. X-23 was a ho. Not that there's anything wrong with that.
5. They’re still hinting that Ernst (the progeriac-looking kid from Morrison’s run) is connected to Cassandra Nova (but it’s already believed that Cassandra was “reprogrammed” to learn morality using a Shi'ar entity’s body, and she’s now called “Ernst”).
6. Glad to see Lila Cheney, Sabra, Diamond Lil and Ursa Major here. They’re underused; hope someone does interesting things with them.
7. There’s a mutant codenamed “Bling!”. With exclamation point. Hokay.
8. Gateway is the great-grandfather of time-lost mutant cop Bishop. Right.
9. It's interesting that the Lehnsherrs (Magneto, Polaris, Quicksilver) were depowered, with the possible exception of, of course, mucked-up-like-Hal Jordan-Wanda.
10. Nightcrawler and Scarlet Witch have a child in an alternate future, Nocturne, and in the tradition of Cable, Stryfe, Rachel Summers, Psi-Lord and Bishop, she’s in the current reality/continuity. Hope Marvel would hook Nightcrawler and Witchy up. Wanda can finally get knocked up with her own real kid and she can wish everything back to status quo once this whole “no more mutants” storyline gets boring.

Oh, this isn’t 198-related but I read in some reviews last year that in Liefeld’s 2005 X-Force mini, Stryfe was revealed to be… the long-dead Domino! From the future! I dunno for sure how that went down, but I think I wanna read it. Morbid attraction and all that. Hehe.
Posted by OLIVER at 10:14 PM 4 comments: 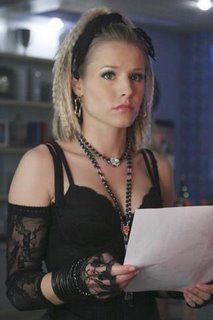 After getting a makeover for an ‘80s-themed party, Veronica Mars (Kristen Bell) quipped, “I look like Manila Whore Barbie.”
("Ruskie Business", season 1, episode 15)

Heehee. This is the first episode of the hit-acclaimed teen show that I watched in its entirety. Well, kinda… I was checking my email while the TV was on two nights ago. But it was pretty clear that this episode was smartly written, witty, and very contemporary. And Veronica is the Nancy Drew of the mid-‘00s, if you will. Plus, the episode had Alyson Hannigan! Been a while since I saw her. She was the lezzie witch in Buffy, and the Band Camp girl in the American Pie movies, for those unfamiliar with her real name. She plays the sassy but sarcastic older sister of one of Veronica’s friends here. Ah, I miss her as Willow. Wish that spinoff Buffy series will still materialize, whatever that may be.

While looking for this photo in different screen caps and pic galleries, I kinda got spoiled on the bigger mystery arc in previous episodes, but, eh, I still wanna watch the rest of the show eventually. Hope ETC does a marathon one of these days.
Posted by OLIVER at 8:05 PM 2 comments:

Got an unusual text message from a friend this morning: “Ano ba, magblog ka na.”