The past two days’ rampaging typhoon has officially and abruptly put an end to the summer season, or so we’re told. The weather’s been crazy that way here; non-stop heavy torrents are sandwiched between unforgiving, scorching, summer-like days even during the supposed rainy season. You can never get used to these overnight weather switches.

It was so wet and windy yesterday that I postponed hanging out with a friend and just stayed indoors. Slept through most of the six-hour-plus brownout and just dreamed of snuggling and other stuff I love doing during rainy days. Haven’t been wearing underwear again because they’re all frigging wet. Oh well. At least I don’t feel constricted. Yeah, I feel free under my shorts.

Just watched the nice Firefly pilot episode last night, after sketching. Also surfed, listened to music and peeked at other people’s bloggies. I felt really hungry after , but I didn’t feel like spending for a food delivery. And very few of them are open 24 hours. I’ve been eating decent meals but for some reason, there have been a number of instances in the past week when I felt really hungry late at night. I couldn't find anything, so I snacked on some chocolate-flavored Stick-O’s; they’re crunchy and hollow cylinder biscuit thingies, for those who don’t know. Feeling a little full, I sifted through a stack of old books and comics to keep awake.

I discovered one of the Penumbra books that Benedict recommended and left in my things god knows when. That’s David H’s Takod novella, a fun and very visual horror story that has a sneaky, Gold’s Gym member-Asiaweek reporter for a protagonist. Heheh. He pulls it off, of course. Dave knows how to play with mood and mystery, and while Takod was a mite shorter than I expected, the Asian mythological elements he explored conveniently furnished the story its unsettling creep factor. Hope this gets a sequel.

Anyway, will enjoy the cool weather while it lasts. Hope it continues in the next couple of days, minus the calamity. 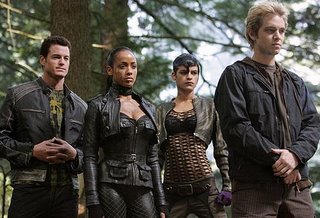 I've been invited to the preview of X-Men 3: The Last Stand later this week, a couple of days before the regular screening. Got this pic from superherohype. Madrox, Callisto, Arclight and Pyro are some of Magneto's Brotherhood recruits.

I wish Fox had given bigger photos of the awesome villain core group pic to the websites. It had these four, plus Juggernaut, Kid Omega, Magneto and the resurrected Jean Grey, lined up together in one shot. But the neat pic above, and the rest of the new stills are shot at a nice distance and look clear enough. Some of them show Storm fighting Callisto, and Pyro versus Iceman, among other scenes. Hope the movie's good. Fingers crossed. Or X'ed.

There were only three cakes displayed at one of the nearby mall’s bakeshops in the afternoon. They're normally decked with a number of fanciful ones, but only the plain-looking chocolate-frosted cakes are left. Maybe because it’s Mother’s Day. I didn’t ask; was just craving for cake. We don’t celebrate it at our home, but the sibs and I certainly acknowledge our mom's unceasing dedication and attention. It wasn't an easy job for her; no, not at all. As I was growing up, I began noticing and learning that being a parent required tremendous strength to unfailingly support his or her oft-problematic children, to get them through the endless rigors that life constantly creates for them.

When I first watched Desperate Housewives, I instantly likened her to Lynette (Felicity Huffman), who had to rein in her little hellions as often as she could. I can only imagine how that feels, to raise radically disparate offspring, to bear with and tolerate trying temperaments. Throughout the years, she’s stood by us when life got awfully tough, and it was easy to talk to her whenever things felt hopeless or bleak. I really regret whenever we have arguments and disagreements. I hate that it still happens, sometimes.

I’d like to think that I‘ve always moved independently into my own direction, as have the other siblings, but there will always be matters and moments that draw us back to her advice and her caring voice. Like most mothers, she only wants what’s best for her kids, and she still continues to prove herself daily. She’s the most unselfish person I know, and I feel truly, truly fortunate to be her son.

“I could go crazy on a night like tonight, when summer’s beginning to give up the fight.”
Indigo Girls, “Mystery”

“Let the rain fall. Make it breathe.”
Hard Rain, “I Will Remember”

“Sheets stained, blankets dampened by the rain, shades of gray on my pillow, while the sun tries to shine its beams of yellow.”
Violent Playground, “Moist”

“Wash away my sorrow, take away my pain, you’re love’s coming down like rain.”
Madonna, “Rain”

“The rain, see it falling, but I don't know how long it will be until the storm's over. But I'll wait. I will.”
A-Ha, “Rolling Thunder”

"When love gets strong, people get weak. Sometimes they lose control and wind up in too deep. They fall like rain.”
Cyndi Lauper, “Who Let in the Rain?”

there's a line up there that i know was for me.

you need not even guess which line it is.

Nah, Eon, don't worry. Am not really messing up with anyone's head in particular. But if what I wrote sends mental images, then, so be it. Hehe... :)

And that's probably the closest I'll ever write about my body or my intimate apparel. ;)

question. have there been any of the superheroes who became mom and dad. and what happened to their careers when they became parents.

Yup. A lot. Will detail it in a new post. Mr. Fantastic and Invisible Woman, Spidey, Wolverine, Batman, Colossus... they're just some of them. :)

underwear talk -- too much info again? he he