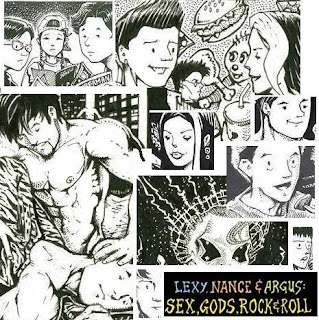 Okay, it’s been a while since I plugged my stuff. I have reason to, right now.

Lexy, Nance & Argus: Sex, Gods, Rock & Roll is now at Comic Odyssey in Robinson’s Galleria. My thanks to Sandy Sansolis for letting me sell the comic book there. And thanks to Gerry Alanguilan for introducing me to him last week. Copies will be delivered to the Robinson’s Place (Malate) branch of Comic Odyssey by Wednesday, as well. I’ve been to the shops a few times, and I noticed that aside from being big stores, they’ve got a nice selection of titles and back issues, and good bargains on action figure sets. Go visit, and talk to the friendly guy and girl at the counter.

My book is also still being sold at Druid’s Keep in Gateway Centre (Magallanes), and Pride Exchange (Malate). Go grab a copy for yourself or a friend if you haven’t, yet.

Last January, I discovered that a Greenhills toy shop was selling the Wal-Mart exclusive Marvel Legends set at a considerably lower price compared to other hobby shops. I obsessed over it for a few weeks, and later decided, after much deliberation and computation, that I’d only get half of the 12-figure set. I couldn’t afford the entire thing even with the lower price tag, so I asked a fellow toy collector, old friend Ian O., to arrange a group-buy with other people from a local toy board. Luckily, Ian wanted to get three of the toys, and the remaining figures were bought by a guy named Al, who’s also knowledgeable on ML’s. Like Ian and myself, he's a little critical of certain action figures’ features (he wishes that the Wasp had translucent wings).

I’m quite happy with my haul. I wasn’t keen on building a Giant Man bonus figure anyway, as I already have the regular version of the character some time ago. So those that I really wanted, I finally got, like Sentry (finally, a Superman-level Avenger!), Warbird (one of my fave Marvel heroines), Kitty Pryde (which looks like Angelina Jolie), and Havok (in his classic costume with headgear), and to a lesser extent, the "Age of Apocalypse" Sabretooth (the good guy Exiles member) and Weapon X (another Wolverine, but scaled just right). Yay! They’re worth the wait. I wish though, that Sabretooth’s teeth paint didn’t make it look like he had gaps between teeth, and that Weapon X’s uber-thick eyebrows looked better. Despite those imperfections, I’m really happy with the bunch.

The toy hunt doesn’t end there, though. I’m looking out for some ML’s and other related toy lines because they suddenly became buy one-take one! I’m one excited toy geek. I waited for some of those to go on sale, and now they are. Woohoo! And, frack, I need money.

My, that was disappointing. It took Captain that long—seven issues—to realize that he’s not fighting for the interests of the common American anymore? It was perplexing, the way the main Civil War book didn’t mention important details, which happened off-title. But despite being a quick, jumpcut-y read, it still felt padded because of the weak resolution and squandered pinup pages. Cap’s surrender, while understandable because it was done to preserve lives and property, was executed rather unconvincingly. So, questions:

Why was Namor shown only once, and was never seen again? The poorly dressed, generic-looking new Champions had more panel time. And speaking of absences, where were Storm, Monica Rambeau, and Sentry? They’d have contributed significantly to the final battle, but all we got were the typical face-offs.

What was the point of resurrecting Captain Mar-Vell for this event, when his one-panel appearance didn’t show him doing anything important?

Why were the villains sicced on the heroes and left unwatched? Jeez. Brilliant idea,

Speaking of which, what exactly did Venom do to Cap? We don’t see any blow connecting in any way.

Why was Spider-Man wearing the black costume again?

If Bill foster was Tony and Hank’s friend, why was the murderous Thor clone-cyborg-LMD reactivated?

Why was Hank Pym Time’s “Man of the Year” and what exactly is his “global revolution”?

Why was there no mention whatsoever of the real villain in the Stanford tragedy? Nitro was in the town because he was placed there and power-augmented by someone from Damage Control, according to the Wolverine tie-ins.

Why keep the Negative Zone prison operational, when conditions there have forced one inmate (Digitek) to kill himself?

What are the other 41 ideas “for a safer world”? Was cloning dead superpowered friends one of them? Isn’t that unethical, and potentially dangerous to the world?

Anyway, Tony Stark’s side won, so, boo! Cap’s team was about the protection of the superhuman community’s civil liberties. Manipulative, lying Mr. Stark promises to protect the identities of his fellow costumed adventurers, but that didn’t work out too well for Peter Parker, did it? And SHIELD has most of the heroes’ secret ID’s, anyway. I hoped, when the first issue came out, that Stark would take over SHIELD, and he did just now, but it feels too late after the fascistic implementation of the registration act. Still, this new, more organized system of superheroing and regulated adventurism is worth looking into in Dan Slott’s upcoming The Initiative series. Slott knows his Marvel superheroes, and I hope that it’ll satisfy those who felt cheated by the CW ending.

Um, I hope I didn't miss anything, but who was Ronin who saved Maya from Elektra?

Yay on your book! :) I'll go get myself a copy. Well I'll probably end up giving it to my friend. But I'll read it first :) I haven't stopped by in AGES. Now lang. Feels good.

Hello Ri, been a while! Nice to see you here again.

About the book, old stuff, but please do get one for your friend. Thanks so much! :)