Two weeks back, I was able to interview Ziggy Marley, who was in the country to headline the MTV Reggae Fest that same day, as well as to promote his second CD, the indie album “Love Is My Religion.” That is one cool dude. I especially like what he said about that catchy title track: “That is the message that I’m inspired to tell the people, that it is love, and not the ideologies that we have today that must be the way to God, to spirituality, and to peace and happiness for the human race.”

Here are some lines from a few songs that touch on faith, worship, or doubt. There are different messages, and while some of them don’t necessarily or directly talk about religion or spirituality per se, these lyrics have made me think about them.

“I drive by the homeless sleeping on the cold dark street, like bodies in an open grave, underneath the broken old neon sign that used to read ‘Jesus Saves’.”
Poison, “Something to Believe In”

“If there’s anything good that happens in life, it’s from Jesus.”
Amy Grant, “Hope Set High”

“Father, if Jesus exists, then how come he never lived here?”
Sting, “All This Time”

“There’s a God-shaped hole in all of us, and it’s a void only He can fill.”
Plumb, “God-Shaped Hole”

“If God had a face, what would it look like? And would you want to see, if seeing meant that you would have to believe in things like heaven and in Jesus and the saints, and all the prophets?”
Joan Osborne, “One of Us”

“A teardrop falls from up in the heavens, drowning the sorrow of angels on high, for the least of the helpless, the hopeless, the loveless. Your Jesus, His children, He holds in His arms.”
Jars of Clay, “He”

“We sit outside and argue all night long about a god we’ve never seen but never fails to side with me.”
Primitive Radio Gods, “Standing Outside a Broken Phone Booth…”

“Think of gentle Jesus. Think of the Buddha underneath his tree. They taught the world about love and how we all can be, how we can all be free. Open our hearts and see love shine.”
Live, “Love Shines”

“Touch the fingers of my hand and tell me that it’s me. Holding on and on to Love, what else is real? A religion that appeals to me: I believe in me.”
K’s Choice, “Believe”

Everyone knows by now that Captain America’s dead. It’s a big deal for some readers, yes, as he was assassinated not long after his surprise surrender, which ended the superhero Civil War. But no, this isn’t the first time that he was killed. In fact, these superheroes are like your old mythological beings or religious messiahs, in that they have sacrificed their lives, sometimes for the sake of many. But again, death is not the end, and they can’t seem to enjoy eternal rest, long enough, either. Like Osiris, Jesus, and even King Arthur (whose legend foretells his eventual return), your average superhero has at least died once (maybe twice!) and has lived anew, with a renewed sense of purpose. In universes like DC and Marvel, there are Lazarus Pits, cosmic entities, and Hand ninja rituals that don’t let the dearly departed corpses to stay that way for long. Well, here are some formerly deceased characters I can remember right now (apart from Dead Girl, Resurrection Man, and Mister Immortal, because that’s actually their shtick). 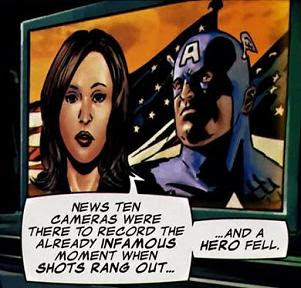 Captain was killed before, first by godlike Michael Korvac, along with members of the Avengers and Guardians of the Galaxy. Later, he was killed, along with 20 other Marvel heroes, in Secret Wars I by Dr. Doom. Fellow Avenger Hawkeye has died three times (SW I, "Disassembled," House of M), as did Wasp (twice in SW I, and later in battle with the Legion of the Unliving in 1987). The thunder god Thor isn’t unkillable either (SW I, Legion of the Unliving, Ragnarok, etc.), but has returned accordingly. Adam Warlock, Spider-Man, Iron Man, the Hulk, the Thing and the Silver Surfer have perished in action as well, but they always came back.

The Justice League--Superman, Batman, Wonder Woman, Flash, and Green Lantern—were brutally killed, then impaled, by Atlantis' League of Ancients, several centuries in the past. Those were Superman and Wonder Woman’s second deaths (not sure how Diana previously died, but she ascended to godhood after that, while Superman sacrificed his life to defeat Doomsday). Green Arrow, Batgirl (Cassandra Cain), Troia and Hal bit the dust in separate occasions, but were revived later.

The X-Men (Storm, Wolverine, Dazzler, Havok, Colossus, Psylocke, Longshot and Rogue) were magically sacrificed by Forge to defeat the Adversary, but were soon restored by the goddess Roma. It’s actually hard to keep track of Wolverine’s mortality. But Colossus? Aside from the Forge thing, there’s Secret Wars I and his Legacy Virus cure suicide/sacrifice. Jean Grey also died twice (both in Grant Morrison’s run), just like Cyclops (SW I and Infinity Gauntlet). The New Mutants were murdered and erased from existence by the Beyonder during Secret Wars II. Northstar was back in fighting form, also, not long after his demise at Wolverine's hands.

In the Whedon-verse, Buffy died twice and walked the earth again, while her vampire ex-beaus Angel and Spike experienced post-undead deaths. It looks like they didn’t survive the Angel finale, either.

Meanwhile, Ripley from the Alien movies was resurrected after her fiery “kamikaze” sacrifice, but was back in tiptop shape in the forth installment. Reviving her wasn’t easy, however, as there were many failed attempts to clone her perfectly.

Many followers of these fantasy exploits have become jaded, and might complain that some of these heroic departures are cheap ploys, were poorly executed, or just insignificant. And let’s not get started on the villains, whose real power or talent seems to be the ability to rise periodically from the grave. It feels pointless and meaningless, sometimes, and not all of the explanations suffice or are convincing.

But many have accepted that for certain heroes, some of them mentioned above, their sagas don’t have to end in death, and conquering that state of finality may lead to more interesting, recharged stories about previously unseen earthly struggles. I suppose part of the resurrected hero’s mystique is that he’s seen and experienced one of the ultimate mysteries, and seeing unusual beings with “cat’s lives” get these second or third chances probably appeals to many of us mere, escapist mortals easily.

the divinity of jesus was voted on at the council of nicea 538. this means there were christians at that time who considered jesus as would mohamedans would consider mohamet, as would mormons would consider john smith, as would iglesia ni kristo membrs would consider manolo. -- that is just another prophet. have any of these others take control of rome, we would have seen a rise in power and politics of each respective religions.

Thanks for sharing that. Hmm... I wonder if Jesus really existed...