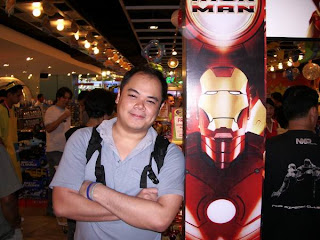 I only had about two hours sleep, but I had to rush to Megamall before yesterday to register for the Iron Man Mind Mash contest. The Iron Man movie toys were being launched, so it attracted collectors who wanted to pick up some rare figures from the set. Anyway, I found out about the new trivia game days before, so I began reading and reviewing handbooks devoted to the character. I actually memorized the names of Tony Stark’s many ex-girlfriends.

Anyway, long story short: Patrick, the first runner-up in last October’s Marvel Mind Mash, won top prize this time. It was weird though, I didn’t feel like I’d make it to the final round because I made a number of mistakes earlier. But there we were again, the two of us facing off. If you’re reading this, congrats, Patrick! You’re a tough opponent. See you at the next game.

Met Martin, the guy whose hip exterior belies a super-knowledgeable comics geek. Ran into the Brookers’ friend, lawyer-writer Drew Fornier, whom I chatted with a bit before the contests. Will post photos of them in a bit. Also saw Dennis, an old classmate from college, who had bits of intriguing info about some of our old classmates. I posed with an Iron Man mascot, posters, and fellow contestants. I felt really tired because I lacked sleep, but it was a fun event, nonetheless.

After the launch, I felt really woozy. Yeah, the feeling of losing sucks, too, but I got over it quick. Dicky boy gave me a toy he won in the Ozine event last week, and he’s been waiting to give it to me for days. Yeah, it’s a “limited edition” Iron Man figure from the movie line. So I didn’t go home empty-handed. We ate yummy pizza and called it a day. 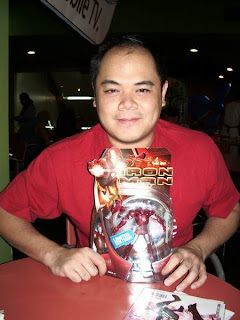