Avengers: The Initiative, a year later 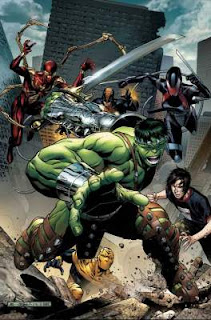 Thirteen issues (counting the important Annual) later, Avengers: The Initiative remains the most exciting of the three current Avengers titles, even when there are only a handful of crimefighters-turned-instructors that officially belong to Marvel’s star super-team.

It’s still about the post-Civil War hero landscape, where registered adventurers are required to undergo strict training prior to being issued their superhero licenses. New characters like Komodo, Cloud 9, Hardball, Trauma and MVP were developed alongside pre-existing ones such as Constrictor, Slapstick, Taskmaster, Triathlon, the irredeemable Ant-Man, and many others.

Co-writers Dan Slott and Christos Gage have been great; they’ve worked some nostalgia-triggering components into it, but it still mostly tackles how the Marvel U has changed. Fresh perspectives and a revolving focus on its large cast keep things from becoming dull. It’s amazingly uncluttered, for something that has characters with complex histories galore.

Conspiracies, transformations and a bittersweet ending to the yearlong arc have been handled with much care, the writers’ and artist Stefano Caselli’s enthusiasm for the project clearly evident throughout those issues. The substitute artist, however, is seriously lacking when it comes to facial expressions and action scenes.

Art inconsistencies aside, Avengers: The Initiative is consistently well-written. Issue 13 starts with the introduction of a new batch of recruits, a mix of familiar and obscure characters that, hopefully, will be just as immersing as the previous group of trainees.