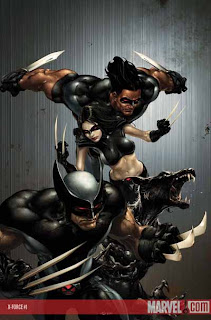 This is where those New X-Men writers, Craig Kyle and Chris Yost, moved to after their belatedly enjoyable run. They’d have done something interesting to Young X-Men had they continued writing about the fun team they established previously, but instead, they’re doing this book, about Cyclops’ secret proactive task force/assassin squad. The concept’s a little silly at first; the team that debuted in the mega-X-over Messiah Complex consisted of clawed mutants or trackers. But it felt right, somehow, and that first mission wasn’t bad. Well, not that bad for the surviving members.

With Caliban dead and Hepzibah recovering from injuries, the team currently consists of Wolverine, Warpath, X-23 and Wolfsbane. They’re not all natural killing machines (especially Rahne Sinclair and James Proudstar), but they’re soldiers assigned to do the dirty work. But even if it’s composed of major mutant fighters with years of training, one of the members gets captured and kidnapped in front of the rest of the group.

Blame it on the lack of superpower diversity! A long-range energy blast or mind-powers would’ve been handy in such a situation, but no, they’re all stabby brawler-types. But that said, it would’ve happened anyway even to your regular team of superpeople (and it has, many times over).

The fights get really bloody, hence the parental advisory label. So it’s clearly not your regular X-book. But the title is something for devout X-fans, as the writers themselves are obviously fanboys. The good kind! They use story elements that are steeped in continuity, but they avoid making it feel cluttered for the reader. Those with knowledge of X-lore, however, will find the twists and turns engaging and nostalgia-inspiring. One resurrected villain leads to the return of another old, forgotten one, and that paves the way for more plausible resurrections. The cliffhangers get better each issue.

Clayton Crain’s art looks good; he’s done much better painted stuff some years back but it’s still uniquely his style. It gets too dark, sometimes, and his Wolverine mask looks a bit awkward, but it doesn’t get awful. His art mostly captures the atmosphere of the story, which is complemented by a sharp sense of design.

In just four issues, the war between Xavier’s former students and the Purifier bigots have escalated; the stage is set for some really big and bloody battles, and it looks like this small team is the only one that can prevent the extinction of mutantkind at this point.

It’s a good, entertaining read. But eventually, the roster needs to expand and change. The repetitive cutting, slashing and stabbing will get old, inevitably.