‘X-Files: I Want to Believe’: Mulder and Scully, back to basics

Six years after “The X-Files” went off the air, Gillian Anderson and David Duchovny reprise the FBI agent roles that made them famous in a self-contained new film that revives familiar themes. “The X-Files: I Want to Believe” feels like a longer episode of the beloved TV show, but it’s typically suspenseful and atmospheric. 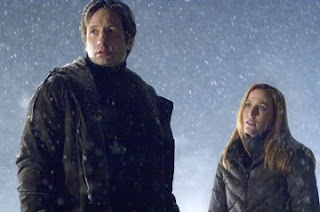 This time, there are no muddled alien abduction mysteries or government conspiracies, which ultimately convoluted the show’s main mythology. Instead, “I Want to Believe” is in the vein of those episodes that focused on single, smaller cases. But there are many of those in the series’ nine-season run that are better-told and deeper than this film.

It’s a nice reunion that fans will want to see. After the show ended unevenly and with some loose ends unaddressed, it’s great to watch agents Dana Scully and Fox Mulder in action again, minus the baggage and the clutter. It’s strange seeing them revert to their original, default templates, though--Scully as the debunking skeptic and Mulder as the open-minded believer again is only partly believable.

The former partners, contacted by a suddenly forgiving FBI, reunite on a case that seems to involve psychic phenomenon. A young woman suddenly went missing, and Mulder’s experience and insight on paranormal activity might prove valuable in deciphering the few clues they uncovered.

The random psychic revelations that seem to point at the right direction, however, manifest themselves through a convicted pedophile, ex-priest Joseph Crissman (Billy Connolly). Mulder and Scully butt heads on the veracity of the claims, while the clock ticks on the missing woman.

Creator Chris Carter directs “I Want to Believe” from a screenplay he co-wrote with frequent X-Files scribe Frank Spotnitz, so it feels like one of the more inquisitive episodes from the outset. The Mulder-Scully dynamic is still synergistic and intriguing after all these years, thanks to the genuine chemistry between Duchovny and Anderson.

Scully as a full-time doctor and Mulder as a recluse are to be expected. It’s just not totally believable that she seems to have trouble believing things outside conventional parameters after everything she’s seen in the show, while it’s quite odd that Mulder’s lost some paranoia after experiencing some major ordeals.

But the components are there for a good mystery, enhanced by the ex-FBI agents’ crises of faith (and non-faith). There are good references to continuity, as a few past cases are referred to briefly. There’s still some humor, even when the tone gets irretrievably bleak.

However, the puzzles could’ve been better. The dialogue gets a little stilted from time to time, especially when it refers to Mulder and Scully’s close relationship.

The first X-Files film, 1998’s “Fight the Future,” is still the more memorable endeavor, even if it tied largely into the big alien invasion arcs when it started becoming complex. But the show always offered that perspective that there’s more to some things than meets the eye, and that some truths, however elusive, can be found. “I Want to Believe” captures those truisms again, as well as the special Mulder-Scully symbiosis, even when the mystery angle is simpler than usual. The show had great stories that would’ve made better film translations, but seeing the iconic TV tandem again is just so worth it.