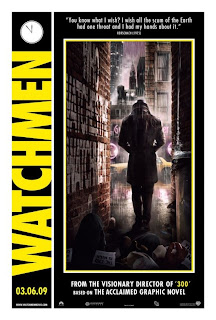 Zack Snyder does an impressive job of translating Alan Moore and Dave Gibbons’ highly acclaimed “Watchmen” to the big screen, changes to some important details notwithstanding.

Costumed American vigilantes in the mid-‘80s figure in world-changing situations in the gritty and audacious epic, which makes a successful transition to film. It’ll mostly please fans of the series, despite a re-imagined major story element. Some spoilers ahead.

The film version’s “master plan” works just as well as the original idea, since the missing artists--crucial to the book’s pseudo-alien invader plan--weren’t mentioned. While not everyone may like the alteration, it still works, as it ironically connects a scapegoated Dr. Manhattan to the climactic, globe-spanning attacks.

There are other unavoidable changes, but it’s an adaptation that’s still faithful to the essence of its source material. Many scenes are practically storyboarded already by the existing panels. The backstories are compressed well into a ruminative Bob Dylan song early on. The other songs--such as Nena’s “99 Luft Balloons” and an instrumental version of Tears for Fears’ “Everybody Wants to Rule the World”--are catchy and obvious, but nonetheless send the viewer back to the right era. The climate of fear inspired by impending war is present, albeit on a bigger, almost unimaginable scale because of the existence of one godlike being.

At two hours and a little over 40 minutes, “Watchmen” does an astounding job of making the characters as real and layered as their comic book counterparts, especially the Comedian (Jeffrey Dean Morgan), Rorschach (Jackie Earle Haley) and Dr. Manhattan (Billy Crudup). The drama is replicated sublimely. It’s great to finally see the cast of anti-heroes in dynamic, well-paced motion. There’s also more gore, which shouldn’t come as a surprise since Snyder previously directed the bloody “300.” 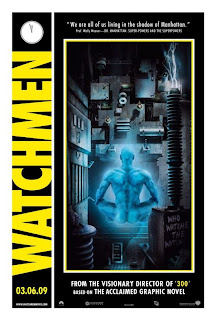 Still, it’s a little annoying that some scenes had to be cut out for the local theaters. It’s still confusing--what’s acceptable and what’s not for an R-13 rating? It’s understandable that the distributor wants this shown at the mall cinemas, but it’s a film for adults. A steamy lovemaking scene is mangled, so the accompanying lyrics to “Hallelujah” get similarly distorted as a result.

Cuts aside, “Watchmen” is still a great film. It might disappoint or alienate non-fans or non-comics readers expecting the usual formula. But it’s a special, thought-provoking adaptation. Read the book, then watch the movie, or vice versa. Time and money well-spent.

just watched it yesterday, and boy, do i love rorscharch. :) its a good thing the film makers reinvented ozymandias' silly golden costume complete with glitering headband and purple cape. putting that onscreen would be so unbearable to watch. hehehe.

I liked the way the 40s heroes looked like they really made their costumes during that era. It looks goofy, but adds realism at the same time.

Dr. Manhattan's head/face was well done. He looked real (especially when he's in a suit) but when he's all naked the CGI becomes apparent. Plus, the anatomy is off, IMO.

Strangely enough, I liked the Comedian the best. Sure, he was an asshole, but his characterization was the most fleshed out among all of them.

Ozymandias' new costume... it's okay, I guess. Not so sure about the sculpted nipples, but I like the stylized headgear. :)

Reno- I like the look of the old heroes too. I agree; they look realistic and a little silly, but still striking.

I like Billy Crudup as Dr. Manhattan... the body is just a bit stiff, I think.

The Comedian is a horrible guy, yup. But I like how he was handled. Jeffrey Dean Morgan's just perfect. :)