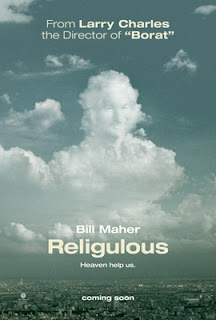 “Religulous” is a documentary focusing on human perceptions of the divine and questionable parts of major religions and their offshoot groups. It zeroes in on different aspects of the subject without losing its sense of humor--there’s even a funny juxtaposing of outlandishly clad rock stars like Elvis, Prince and Marilyn Manson (in full pope regalia!) with images of the Pope and other religious leaders--and Maher naturally keeps the debates lively.

It’s probing, compelling and, at times, disturbing because of the stranger-than-fiction content. Maher really is in his element, promoting doubt when “the other guy is selling certainty.” Whether one believes in the unseen or has major doubts, “Religulous” and Maher’s “Gospel of I Don’t Know” are things to listen to and think about.