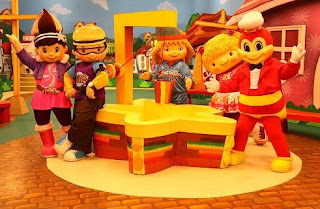 “Jollitown” is educational and it just might make you hungry.

In Jollitown, the characters were magically wished into existence by a lonely Jollibee in the show’s previous season. Together, they bring cheer and share values to visiting kids via catchy song numbers and enchanting adventures. But of course the show’s stars are Jollibee and the gang--each represents an item from the popular fast food chain’s menu.

Tagalog and English are naturally spoken by the articulate now transformed into identifiable figures: Popo the athlete; Twirlie the performer; Hetty the cheerleader; Yum the tech-savvy guy. Jollibee is still Jollibee, however, an iconic and friendly presence that did not go through any visual or personality makeover.

While the episodes are competently crafted, some story points don’t always properly translate because of the mascots’ limited facial expressions. Jollibee and company’s fixed smiles don’t fit, for example, when they’re worried about a malicious sorceress’ attacks in one episode.

It’s good that the show encourages kids to read books and use their imagination in one of the initial season’s episodes. Oddly, though, it had to rant about one girl’s habit of reading comic books in the same episode.

Perhaps in a future episode, nutrition and proper diet will be discussed. It might pose a challenge for the fast food-connected show, but that topic is relevant and worth teaching to youngsters (and even some grownups). Regardless, one may hanker for some fast food during or after seeing the show, as it’s hard to disassociate the jolly pals from their original roles.