Derivative and almost devoid of genuine tension, “Patient X” is Yam Laranas’ new horror-action flick, in theaters mere weeks after “The Echo,” the Hollywood remake of his local film “Sigaw.” The bogeymen this time aren’t restless apparitions, but a group of modern-day aswang. 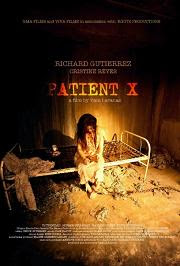 Expectations are unavoidable; Laranas has a gift for creatively melding mood with uncluttered storytelling, after all. But “Patient X,” while it has some creatively composed visuals, has a pretty thin story, and centers on some pretty two-dimensional characters.

It quickly becomes a cat-and-mouse, divide-and-conquer monster flick that we’ve seen many times before, sadly. It’s tricky enough to have vampires as the villains; there aren’t many fresh takes on them. They’re no different here--just hungry, taunting and violent beasts with human-like emotions.

The chaos is pretty by-the-numbers. The situations are too worn-out and procedural that it becomes difficult to care for the characters. It doesn’t help that every time Gutierrez shouts, it feels half-hearted and unconvincing. TJ Trinidad, as the vengeful cop who punishes the undead, does okay. But his character is pretty slow when it comes to vampire-slaying.

Perplexing and patience-testing, “Patient X” isn’t an unnerving screamer at all. It’s not without interesting imagery, but again, it gets difficult to suspend disbelief. It gets weird when an attraction between Gutierrez and Reyes’ characters is implied. As for the vampires, the iterations here--with their perpetually bared fangs and beastly grunts--are quite flat and predictable. You just know exactly when they’ll attack, how they’ll behave, or when they’ll get what they deserve.