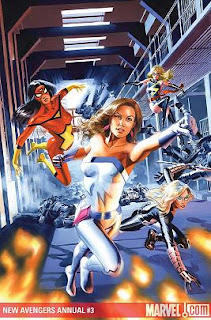 In New Avengers Annual # 3, another member is held captive by Norman Osborn and company. Shortly after the imprisonment and liberation of Luke Cage, Ronin attacks the Dark Avengers by himself, and is eventually captured (in The List: Avengers one-shot). This inspires practically the same divert-and-rescue tactic all over again, and the New Avengers embarrass Norman and the pseudo-heroes once more.

Be that as it may, it’s a solid issue with impressive art by Mike Mayhew and Andy Troy. What’s with the altered cover image, though? Jessica Jones’ face looks better in this promo piece (right) than in the final product, where she looks a little constipated.

Yes, Jessica Jones is back as Jewel, a nice, if unsurprising, addition to this Avengers team. It’s good to see her fighting alongside other tough heroines in this story.

The last page isn’t exactly a shocking cliffhanger, because anyone who knows about the Siege event knows about the return of a certain patriotic hero to the team. A good ending and a good read, just the same.