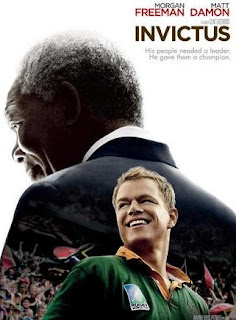 Clint Eastwood tackles race relations once again in “Invictus,” an inspiring recollection of Nelson Mandela’s support of South Africa’s mostly white rugby team, which some considered a remnant of an undesirable era. Morgan Freeman stars as the celebrated prisoner turned unifying leader, while Matt Damon plays Francois Pienaar, captain of the struggling Springboks. For a film that talks about racial tension, however, it’s not always felt; Mandela’s strained bond with his rarely seen daughter and her memory of racism offer more emotional tug than most of the depictions of distrust here. Parts with rugby matches lack some necessary grittiness, as well. But “Invictus,” despite being trauma-free, still rewardingly chronicles a transformation into colorblindness, made notable by inspired portrayals and uplifting imagery.