The sci-fi series “Dollhouse” imagines a world where a secret organization runs a classy, hi-tech escort service, their human “Dolls” transplantable with a variety of personalities. 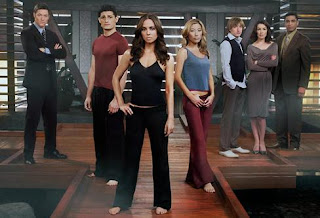 Imprinted with the knowledge and behavior of other people, the Dolls can be programmed for rescue missions and investigative work, as well.

The characters can become all-new ones, but the same technology that gives them different personas and talents deletes memories of their recent activities and escapades.

Numerous possibilities are explored in the short-lived series created by Joss Whedon, who’s best known for TV shows like the beloved “Buffy the Vampire Slayer,” its spinoff “Angel,” and the space western “Firefly.” Unlike his previous shows, however, “Dollhouse” doesn’t have a clear-cut heroine; Echo (Eliza Dushku) is the default docile personality of the show’s main Doll. But Echo occasionally rebels against her programming, and wonders about her real identity and life before the Dollhouse.

While Dushku commendably played reformed bad girl Faith in Whedon’s older shows, she isn’t as consistent with the multiple personalities of Echo; sometimes she’s adequate, but other portrayals don’t get the dimension they deserve. Still, the good interpretations outnumber the iffy ones, and rooting for Echo is easy. And as with Whedon’s previous shows, other intriguing characters enhance the mythology.

Echo’s fellow Dolls, Victor (Enver Gjokaj) and Sierra (Dichen Lachman), are similarly malleable and routinely given specific demeanors, accents and quirks, as requested by wealthy clients. Meanwhile, the Dollhouse branch’s boss, Adelle DeWitt (Olivia Williams), is made charismatic by her duplicity and moments of vulnerability.

Pondering the importance of identity and purpose regularly, the series also descriptively tackles relatable what-ifs. The storylines are mostly unpredictable and clever; the show’s tone shifts consistently without losing coherence.

From an action thriller episode to a tense murder mystery, and even a funny misadventure, “Dollhouse” reliably manages to keep its mystique intact. The steady introduction of multiple characters through the same cast of actors also keeps situations pleasantly challenging.