Mythical beings and creatures from folklore secretly exist and fight for their survival in the intriguing science fiction-adventure series “Sanctuary,” created by Damian Kindler (“Stargate SG-1”). A hidden haven provides a number of rare and extraordinary species shelter and protection from various threats. Run by the enigmatic Helen Magnus (Amanda Tapping), the Sanctuary becomes home as well to new employee Dr. Will Zimmermann (Robin Dunne), formerly a misfit forensics psychiatrist mocked for his outlandish theories. 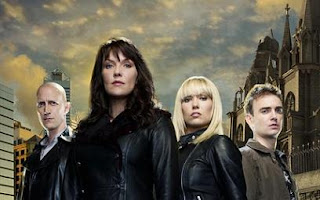 Will is introduced to dozens of wondrous and unsettling characters, collectively called “Abnormals.” These include a telepathic mermaid, an intelligent sasquatch, mutants, and a bunch of sentient non-humans. Will acclimates quickly and becomes an integral part of the Abnormal-saving operation.

Despite its slowly paced first few episodes, “Sanctuary” grows on the viewer, primarily because of its focused mythology. Helen Magnus is a 158-year-old scientist who has dedicated her long life to rescuing and researching about undocumented life forms. Her former lover and patient, the teleporting John Druitt (Christopher Heyerdahl), went insane and became Jack the Ripper. Druitt recently returned and has met his young daughter, the combat-honed Sanctuary operative Ashley (Emilie Ullerup).

“Sanctuary” also takes advantage of its nearly endless menagerie of Abnormals, tying snugly with bits inspired by fiction and history. Episodes in season one that easily stand out are the 2-part “Revelations” (Helen and Druitt team up with Sherlock Holmes and the vampiric Nikola Tesla), “Instinct” (an ambitious reporter witnesses a Sanctuary mission), and “Requiem” (an organism that destroyed countless mermaids takes over Helen in a submarine).

The show’s eclectic group of characters and creatures is reminiscent of the diverse mystical biosphere of “Angel” and the rogue’s gallery of “Torchwood.” While earlier episodes’ special effects are a little clunky, the quality of digital wizardry and prosthetics has gradually improved. The variety of characters in “Sanctuary” allows for numerous story possibilities, and so far, some interesting angles are already being explored admirably by the show’s writers.

“Sanctuary” airs on Sci Fi every Friday () and Saturday ().