I’m rereading some comic books that starred or co-starred different versions of Jesus Christ. Again, no, I don’t believe, and I’ve blogged about it a couple of times. Still, I’m familiar with the messiah figure’s history and deeds, after years of theology classes and rituals. Anyway, these three comic book iterations are irreverent, entertaining, and not for the humorless.

Loaded Bible: Jesus Vs. Vampires. In this post-apocalyptic future, Jesus has returned to protect mankind from vampires. He’s a kickass, sword-wielding warrior, and his “holy spit” can destroy vicious vamps. 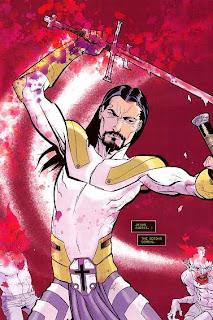 Battle Pope. Now this gun-toting Jesus is funny, a bumbling sidekick to the formidable but flawed Battle Pope. Jesus H. Christ often finds himself in embarrassing situations, but has helped out during missions and has displayed incredible powers. 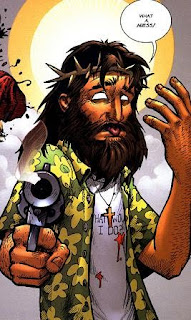 Jesus Christ: In the Name of the Gun. A surly, cigar-smoking Jesus confronts his indifferent heavenly father--who looks like Marlon Brando--about the Holocaust. Jesus time-travels to the past and attacks the Nazis. He can run on water, has killer martial arts moves, and is an excellent marksman. 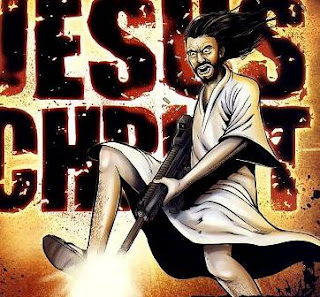