‘Bored’ sensitive but revels in silliness

The characters of the HBO comedy “Bored to Death” seem to be in the middle of transitions, stuck in their respective ruts and figuring out that perplexing stage in their lives. 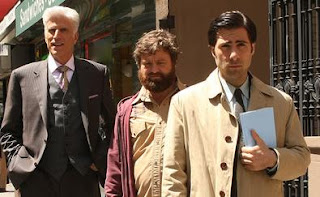 Capable of eliciting mild snickers at the right moments, “Bored to Death” also illustrates the desperation of Jonathan’s boss George (Ted Danson), a magazine editor who occasionally feels the need to escape his gruelling routines. Jonathan’s best friend Ray (“The Hangover’s” Zach Galifianakis), meanwhile, is a comic book creator trying to keep up with a demanding girlfriend.

Impulsively, Jonathan advertises himself as an unlicensed private detective online. Misadventures ensue, of course, but he’s able to solve some cases.

He lets his friends tag along from time to time, and is able to spend his time wisely. These don’t inspire him enough to start writing a second novel, however, and the deadline is looming.

These somewhat successful men are accessible and familiar, especially when they’re dealing with—or ignoring altogether—their insecurities. There’s no alpha male posturing, except between George and his most despised rival (guest star Oliver Platt). There’s an unspoken but pervading sense of brotherhood, and the show distinctly ponders the career and relationship dilemmas of men.

The actors create a laid-back synergy, imbuing their semi-vulnerable characters with charm and believability amidst the ridiculousness of some situations. The characters of season one are given substance, indelible personalities and quirks.

A little “Seinfeld”-ish in its attention to minutiae but having a comedic beat of its own, it is insightful and touching despite unabashedly reveling in silliness and eccentricity.

“Bored to Death” season one airs two episodes weeknights at 9 until July 2 on HBO Signature.