“Too Much Love” didn’t kill Jovit Baldivino; it made him a weepy champ.

The first “Pilipinas Got Talent” grand winner received an overwhelming number of text votes (48.81 percent), beating 11 other finalists in the ABS-CBN reality-talent show. The 16-year-old Batangueño, who has been compared to Journey vocalist Arnel Pineda, sang Queen’s “Too Much Love Will Kill You” on last Saturday’s grand finals show, and again after he was declared winner the next night at the Araneta Coliseum. 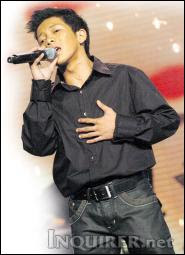 The last two nights featured finalists with disparate abilities, much like the show’s foreign progenitor and counterparts, so it was an interesting mix of singers, musicians, and non-musical artists (specifically, a magician and a ventriloquist).

These finalists performed with Gary Valenciano and bands Kjwan and Sugarfree, among other guests. Those that did not make it to the top three received P50,000 each.

Saturday’s show ran over a patience-testing three hours, but the diversity of talents kept us from tuning out and dozing off. The three judges, Ai Ai de las Alas, Kris Aquino, and Freddie “Boss FMG” Garcia, didn’t have criticisms for the finalists; in fact they were all-praise during the finals night.

While some may disagree with a number of their comments--not everybody gave sterling performances--the trio generated an odd, train wreck-ish dynamic.

De las Alas typically injected humor into her comments, and has gushed openly about the Velasco Brothers’ energetic dance numbers for weeks. Aquino has invited the group more than once to perform at brother (and President-elect) Noynoy’s inauguration. Characteristically, Aquino also managed to sneak in unexpected (expected?) comments that put “FMG” on the spot by suggesting that he should finance the funds-challenged Baguio Metamorphosis in a dance competition abroad.

A man with very few words, Garcia often came off as leaden and too formal, overshadowed by his two more vocal and sometimes gauche co-judges. Perhaps he balances out that equation, but he needs to be more descriptive for TV.

“PGT” has showcased truly talented contestants—Baldivino, singer Ingrid Payaket, and multi-instrumentalist Jeline Oliva, to name a few—and their 15 minutes of fame shouldn’t end here. It’s clear we’ll be hearing again from some of the finalists.

While many of them deserve show biz careers, some need honing, and should consciously make effort to improve. May the next season of “Pilipinas Got Talent” have a shaken-up judges’ roster, and let’s hope the program reveals more unconventional, but similarly attention-grabbing talents.

Replays of the grand finals and awards night air on Studio 23, on Saturday (June 19) and Sunday (June 20).