Local “alternative comedy” weekly program “The Front Act Show” duplicates the formula that made it initially successful, but certain aspects have been improved.

The revamped version has a new and catchy animated opening theme showing an expanded cast. Comedians Mike Unson and Stanley Chi are joined by rock musician LC “Reklamo” De Leon, and cosplayer Benedict Bartolome, who both appeared in a few episodes of the show’s previous incarnation on another channel.

While Unson and Chi still do what they’re good at, they both explore other ideas. Unson puts his analytical wit to good use in his short “GNN: Good News News” portion, while Chi appears regularly as “Dr. Fake,” who dispenses inane advice to “patients.” But they can still be spontaneous: Unson interviews celebs; Chi does non-celebs (effortlessly).

The expansion of the group allows for an eclectic range of humor. “Front Act” fully embraces its geeky side with Bartolome, whose “Ben’s Room” is a venue for toy talk, succinct movie reviews, and nerd jokes.

Guests Jon Santos, Jojo Alejar, RJ Jacinto and RJ Ledesma have been the livelier interviewees. Jao Mapa and Madam Auring have appeared in short but sweet “torture scenes.” In these inspired bits, shadowed figures taunted Mapa for the “Jao Mapa haircut,” and Madam Auring was “punished” for her wrong predictions. 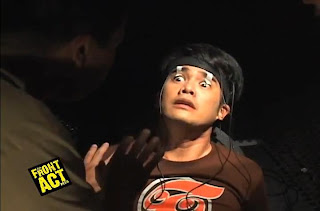 “Front Act’s” experimentation with offbeat ideas often works; aside from the previously mentioned segments, parodies of “24” and “Crocodile Hunter” should be further mined.

However, not all ideas translate properly, and some skits come off as strained and plodding. But despite some inevitable missteps, each comic contributes to the show, and the distinctly diversified program is revitalized by self-aware and permeating geek guy humor.