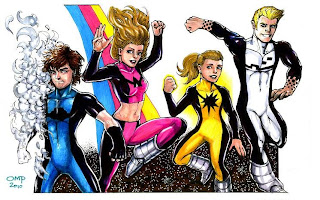 This is probably how Power Pack would look today if we follow Julie/Lightspeed’s current age (17). Teen Julie appeared in the Loners mini, where it was revealed that she’s attracted to girls. She was ten years old in the early adventures (and the out-of-continuity minis), so add seven to the siblings’ original ages when they became superheroes, and this is how Alex/Gee, Jack/Mass Master, and Katie/Energizer must look now. The costumes are based on Julie’s existing one; I just followed the pattern and individualized it. Marvel, if you’re coming out with a new teen book, it should be the updated Power Pack!