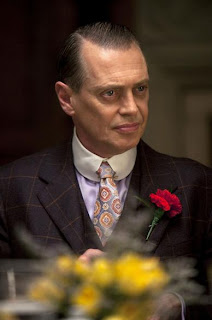 The banning of the manufacture, importation and sale of alcohol in 1920 inspires opportunistic gangs to smuggle or bootleg liquor. One schemer is Atlantic City’s charismatic and chameleon-like treasurer, Enoch “Nucky” Thompson (Steve Buscemi), who effortlessly blends in at anti-liquor meetings and covert gangster gatherings alike.

Law-abiding one minute and law-breaking the next, influential Nucky has no problem with embellishing the truth. He wins over members of the Women’s Temperance League in a matter of minutes with an emotive speech. “First rule of politics,” Nucky tells his confidant and right-hand man Jimmy Darmody (Michael Pitt), “never let the truth get in the way of a good story.”

Inspired by Nelson Johnson’s non-fiction book of the same title, “Boardwalk Empire” has a roster of executive producers that includes Martin Scorsese and Mark Wahlberg. Scorsese also directed the series’ first episode, which firmly establishes the main characters’ motivations and relationships. Atlantic City’s Boardwalk is immediately depicted as startlingly conflicted; like most thriving hubs of any era, it’s where the desperate, the ambitious, and the resourceful converge.

Nucky and Jimmy’s perspectives offer revealing sides to a complex web of deceit and opportunism; they adapt quickly, are compassionate, and can be merciless. Buscemi and Pitt impressively convey differing complexities and a rich spectrum of emotions.

“Boardwalk Empire,” while not breaking new ground with gritty realism and its portrayal of criminal power struggles, still intrigues and transports with its visually resplendent recreation of a bygone era’s defiant empire.