Weird animated shows are commonly found on three cable channels airing US cartoons, but “Adventure Time” is easily among the weirder and more entertaining ones. There has been no shortage of unusual-looking characters in recent years, and bizarreness has practically become the norm, but “Adventure Time” can be counted as one of the rare ones combining odd visuals with rib-tickling concepts.

Reminiscent of the gross and juvenile trappings of “Ren and Stimpy” and the offbeat and trippy world of “SpongeBob Squarepants,” “Adventure Time’s” approximately 11-minute stories are mostly absurd and escapist. 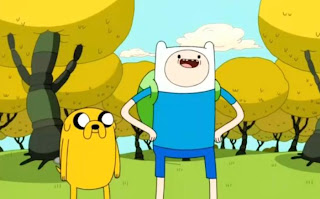 Its primary characters are Finn the heroic human and Jake the shape-changing dog, who both look like simple, child-designed doodles. They live in the , fight threats like the princess-abducting Ice King, and find themselves in exotic locales such as the , and the .

Finn and Jake are an inseparable duo and loyal friends to the science geek Princess Bubblegum, the infant creature Jiggler and the half-rainbow, half-unicorn Rainicorn, among other unique denizens.

Creator Pendleton Ward believes that the “Adventure Time” characters resonate with viewers because the show has “a sense of realism in how the characters feel and react to their world,” letting the audience “enjoy the silly characters while feeling empathy for them when they get emotional.”

That’s especially true for some recurring and single-episode characters; they’re developed just enough to have discernible personalities to match their very specific obsessions. And the silliness is never-ending, just like the main characters’ impromptu quests.

While the stories themselves are sometimes nonsensical, the potent combination of weirdness, memorable exchanges and even the occasional bodily function joke keep every episode of “Adventure Time” funny for the more adventurous kids and escapist grownups.

My seven-year old daughter loves this show. And i must admit, I do, too. It's got the right mix to keep children and adults interested, without the (sometimes) crude humor of SpongeBob. That's a rare feat.

Cool that you both love it! I love it too, I catch newer episodes fan-posted on Youtube. :)