Just some caps from the new Gaga video “Judas.” Interesting song, a verse kinda sounds like something from “Paparazzi,” but it’s still damn catchy. Like late-‘80s Madonna, Gaga knows how to freak out the more conservative Catholics. 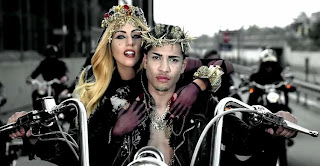 The video has biker characters named Jesus and Judas, and Gaga’s a Mary Magdalene-esque figure whose loyalty is torn between the two. Not as uber-flashy as in her previous videos, the costumes and choreography are still view-worthy. Oh, and Norman Reedus from “Walking Dead” plays Judas. YouTube viewers unceasingly discuss or are scandalized by the lyrics. Interestingly, “Born This Way” continues to scandalize homophobic commenters, as well. 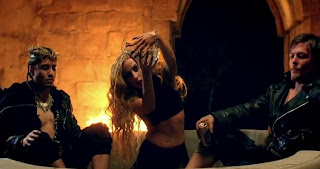 Speaking of Gaga costumes, a bunch of artists’ dream designs were posted on the nymag site last week. Here’s Jim Lee’s drawing. Kinda looks Witchblade-esque. He mentioned that he wanted a “contemporary superhero” feel to it. Um, sorry, but meh. 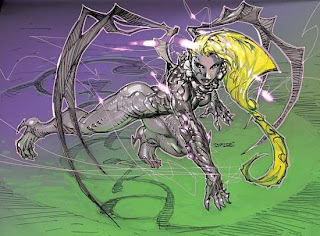 Oh, this post’s title was inspired by a high school memory. A classmate wrote “God Knows Hudas Not Pay” on the chalkboard when there was no teacher around, referring to those punny jeepney decorations. A nun, who was roaming the halls, discovered it much later. She freaked out and angrily asked the class, “Sino’ng nagsulat nito?!”

Everyone knew who wrote it; there was just one guy writing on the board, but nobody judased on him. The nun left, almost Old Testament-y furious.