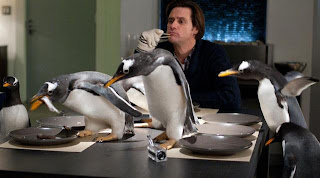 It’s easy to dismiss “Mr. Popper’s Penguins” as a cheesy family flick, as the trailer rather painfully shows Jim Carrey teaching a group of penguins some dance steps. Carrey’s practically done everything, but it still strikes you as odd that he’d be involved in something so… strange.

But it’s surprising that it’s not at all a horrifically done or treacly pet movie; “Mr. Popper’s Penguins” actually pleasantly diverts with its yarn about fathers and children, unresolved issues and recovering relationships. The family comedy-drama’s titular character Tom Popper (Carrey) is a divorced real estate developer who inherits a couple of penguins. He transforms his posh apartment into their cold but comfy habitat, his ex-wife (Carla Gugino) and their kids becoming closer to him again because of the adorable new pets.

There aren’t new stuff or surprises happening here; the movie is pretty formulaic with its family-oriented themes and stages of epiphany, but it’s still quite heartwarming and cute. A toned-down Carrey sufficiently provides humanity to a partly-fantastical setting. Also, Tom’s assistant Pippi (Ophelia Lovibond) amuses consistently with her quirky obsession with words starting with the letter “p.”