“I’m walking while talking,” says American actor Greg Kinnear during an exclusive phone interview with the Inquirer. Scheduled for a long drive the next day, Kinnear takes the opportunity to talk about a recent project while enjoying his “sunny and gorgeous” afternoon in .

The multitasking actor is promoting the Emmy-nominated History Channel miniseries, “The Kennedys,” airing in on September 19-22 (9 p.m. in ). Kinnear is pleased that he’s been nominated for his portrayal of President John F. Kennedy, a figure he describes as “fascinating.” He considers playing JFK (or “Jack”) a rare acting break.

“It was an incredible honor,” Kinnear says. “Jack was president when I was born, and he was assassinated at the exact age I was when I took this job. In a strange way, I just always felt a connection to him, not only because I admired him and thought much of his legacy, but it’s a pretty fascinating human story as well when you consider these incredible relationships he had with his brother, his wife and his father.”

Kinnear first became known as host of the comedy clip show “Talk Soup,” in the early 1990s. He branched out to acting, his performance as a gay artist in the 1997 film “As Good As It Gets” earning him an Oscar nomination for best supporting actor. He has portrayed radically different roles since, and is thankful for the diversity. 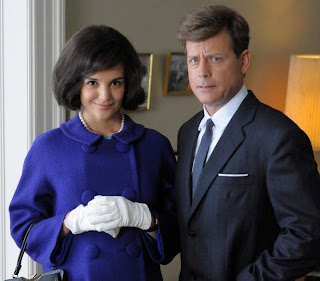 “It’s what I most hope for,” he says. “I kinda like biographies a lot, stories about real people. I’ve done it four, five times. I also like comedy. I thought I’d be making more of that in my career. But I get to do some of that, too.”

Kinnear reveals that researching JFK’s speech patterns and body language was quite easy. “What was very helpful was the large existing archive of film interviews and press conferences,” he says. “Many of his great speeches were filmed or recorded. He recorded many telephone conversations, and you could get some sense of his cadence and sound in all that.”

The actor believes JFK would have made an impressive leader even in a different era: “He’d make a great president today. He was really trusted by the public. I don’t think people realize how terrifyingly close the world was to nuclear war at that time. He was very smart; he was able to prevent that from happening. He’s a fascinating guy who lived through an extraordinary period in time.”

He adds that actors do take some liberties when interpreting the roles, but that “The Kennedys” was carefully created. “I’m not a historian, but I feel an obligation to follow the template of what was real, true and honest,” Kinnear says. “Robert Dallek, a Pulitzer Prize finalist, wrote ‘An Unfinished Life,’ which is unequivocally the best book that’s ever been written about the family and Jack’s administration. There is virtually nothing in the show that isn’t in his book. He’s one of the historians on the show; he vetted the script, so that was good enough for me.”

Kinnear is proud of the show’s 10 Emmy nominations. He and costar Barry Pepper are competing in the category, Outstanding Lead Actor in a Miniseries. “Barry [is] unbelievable as Robert Kennedy,” Kinnear gushed. “His performance is staggeringly great work. He took the role and owned it!”

The actor also praised Katie Holmes for her Jackie Kennedy portrayal. “I had worked with Katie before, in Sam Raimi’s ‘The Gift.’ I was ‘killing’ her in the woods when I last worked with her. Jackie Kennedy was the hardest role to take on, and I have the greatest respect for her for doing it justice.”

Kinnear is set to appear in the comedy, “I Don’t Know How She Does It” with Sarah Jessica Parker. He has no plans of returning to TV on a regular basis, but is not ruling out the possibility on account of the onset of prestigious programs. “Cable channels are creating remarkable shows now … so I’m bullish about it. They’re doing some great stuff.”