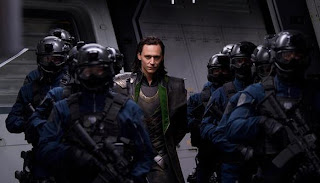 Tom Hiddleston was interviewed by about portraying Loki again in the upcoming “Avengers” movie. Very intriguing. He describes working under the direction of Kenneth Branagh in “Thor,” and more recently, Joss Whedon in “Avengers.”

“The thing about the two of them is that they actually share more than you might first imagine, weirdly. Joss is a huge Shakespeare buff and Ken’s actually a closet comic book fanboy. True story. But also they both have a kind of pan literacy about storytelling and mythology and literature and comics and they understand classic tropes of storytelling, narrative arcs… and they’re also both just immensely passionate people. Really good at leading, really good at inspiring actors and all of that stuff. So… everyone has a different artistic fingerprint. Ken has a very classical warmth about him… and I think ‘Thor’ is both warm and classical in tone and Joss is really interested in comedy, as well, within a Sci-Fi context. He had this huge canvas where superheroes are teaming up to save the world, and he’s brave enough to make it funny.”

That reminds me of Joss’ handling of Buffy and Firefly. Now I’m really interested. Can’t wait for May, 2012.