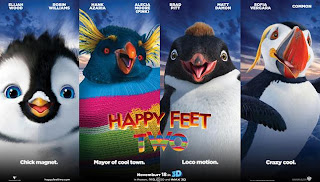 “Happy Feet 2” has solid and vivid animation, but it isn’t as memorable or as moving as the first movie. Dance-happy penguin Mumble (Elijah Wood) is back, now a dad to shy and awkward Erik (Ava Acres). Erik and friends meet old and new denizens of neighboring habitats, and must figure out a way to save their penguin kin trapped by unscalable walls of ice.

Pop star Pink replaces the much-missed Brittany Murphy, which works music-wise, but the late actress made Gloria a more real and empathic character. The grown-up Mumble isn’t really as important anymore, since focus has shifted to his familiarly unsure son. Robin Williams makes things lively with his voice portrayals of characters Ramon and Lovelace, while Sofia Vergara is easily recognizable as the initially uninterested love interest Carmen.

The movie recreates themes of identity and purpose, this time also oddly pondered by marine characters Will and Bill (Brad Pitt Matt Damon), as well as Sven the “flying penguin” (Hank Azaria). Many of “Happy Feet 2’s” characters get to learn from their various interactions, but somehow, there aren’t many emotionally connecting moments. As for the “heartsongs,” the movie’s song selection is more “miss” than “hit.” “Rhythm Nation” feels too forced and there’s Erik’s cringe-worthy ode to Mumble—but it’s not entirely dismissible, as there’s an inspiring and apt cover of “Under Pressure.”