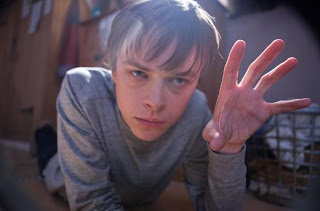 Yes, it’s “The Craft” meets “Akira” meets “Carrie,” focusing on similar themes but given a very contemporary spin. Three kids gain psionic abilities after discovering a buried, oddly shaped object in the woods. Andrew (Dane DeHaan) is the nerdy kid who chronicles his daily dealings with a camera; he and his cousin Matt (Alex Russell) and their friend Steve (Michael B. Jordan) soon find themselves wielding incredible powers after exposure to the object.

Using “found footage” storytelling, the film chronologically pieces together clips from different sources, so the trio’s gatherings are well-documented. Its shaky, deliberately amateurish cinematography in the beginning is eyestrain-inducing but mercifully brief.

Changed tremendously, the teens enjoy their powers, pranking strangers and schoolmates alike. Andrew, the bullied kid, easily masters his telekinesis; it’s only a matter of time before he snaps and declares himself Magneto to the “lesser” humans.

Andrew’s story has similarities with Marvel Comics’ character Vance Astrovik a.k.a. Justice, in that both are telekinetics with violent fathers, whom they later deal with using their TK. Over-exertion also causes the comic book character and the “Chronicle” teens’ nosebleeds.

Despite its unoriginality, the very human reactions of the characters to developing extra gifts are palpable; it’s exhilarating to see them discover flight, and find ways to make their lives easier. DeHaan is also a promising actor; he’s got a handle on his character’s vulnerable but creepy vibe, and keeps things from becoming cheesy.
Posted by OLIVER at 5:54 AM