(From the April 1-15 issue of The Fortnightly)

It certainly reflects many real and saddening OFW tales, but the relentless tearjerker A Mother’s Story manages to illustrate some triumphs amid some disheartening truths. The titular mother is played by Pokwang, who’s mostly associated with comedic roles, but is nevertheless effective in her portrayal of an unsung and unappreciated breadwinner. 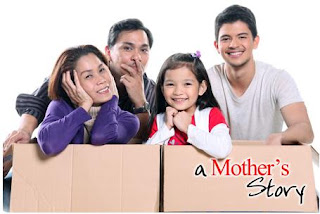 Pokwang’s Medy is a makeup artist, part of a local celebrity’s small entourage to the . She accepted the offer for extra cash, as she’s the sole working parent--her husband (Nonie Buencamino) is unemployed and a gambler, and her younger child has health problems. A chance meeting with an old classmate, Helen (Beth Tamayo), presents a turning point; Medy is persuaded into staying and working illegally, convinced that her sacrifice will ultimately benefit her family.

The money does pay for all their incurred debts and then some, although her husband and older child were initially baffled that she hasn’t elaborated on her change of plans. Medy’s US stay stretched to several years; she worked as a maid for lawyer spouses aware of her situation. She’s eventually discouraged from leaving the house, threatened with the possibility of arrest. But forming a bond with her employers’ young daughter keeps Medy from losing it.

Medy’s story is mostly told through flashbacks, and it isn’t until she returns to her “abandoned” family years later that the movie transforms into a familiarly melodramatic sojourn. It’s totally unsurprising that her husband and teen son (Rayver Cruz) have become ungrateful wretches, and that she’ll be discovering painful secrets that will lead to mutual blaming and regrets.

Pokwang is inspired; it’s actually quite easy to believe her during the more depressing parts of her American “adventure.” Daria Ramirez competently portrays her once-demanding mother, as well--no, there’s no resemblance, so let’s assume that Medy probably looks a lot like her absent, unmentioned father character. It’s also a bit distracting that the actors portraying Pokwang and Buencamino’s children are Rayver Cruz and Xyriel Manabat, because none of them really look alike.

But the stifled relationships are nicely represented. Medy is spurned by her own son immediately after her return from her ordeal. Interestingly, the younger child is somewhat fascinated by the stranger she’s supposed to call mother, and is excited that she finally has one she can show to teasing classmates.
The film by John-D Lazatin deftly illustrates the reality of the sadder OFW and stories, but it also reminds that while there are opportunistic characters everywhere, there are also those who are genuinely generous and understanding, whether they’re Filipinos or not.

A Mother’s Story also focuses on the reality of hardworking parents who must sacrifice time with their children to provide for their future, bearing with tough jobs, or even various indignities abroad.

While it’s quite redundant when dealing with the aftermath of Medy’s “abandonment,” and it resolves some problems too cleanly and almost unrealistically, A Mother’s Story gets the pained but exceedingly selfless working parent right, thanks mostly to the lead actress’ surprisingly powerful performance.
Posted by OLIVER at 4:03 AM