“This doesn’t deal with the sinking of the ship,” clarified Canadian actor Kevin Zegers, who stars in the History miniseries “Titanic: Blood and Steel.”

“It’s more about the culture of in that era and a lot of political things that were going on,” he told the Inquirer in a phone interview. 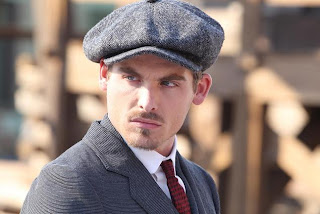 “There’s a love story; there’s a class struggle,” he said. “It’s a period drama. Titanic is sort of the backdrop of the story.”

The actor grew facial hair for the role and worked with a voice coach to prepare himself for the 12-hour series. “I wanted to get the accent right,” he said. “It’s something I really quite enjoyed and would like to do again.”

Zegers appeared in commercials as a kid and landed roles in movie and TV projects such as “Air Bud,” “X-Files,” and “Smallville.” In 2005 he played the teen son of Felicity Huffman’s character in the acclaimed film “Transamerica.”

Prior to “Blood and Steel,” he had a recurring role on “Gossip Girl.” He considers himself fortunate for the opportunities to portray diverse characters.

“I started as an actor when I was 12, doing Disney movies and stuff,” Zegers recalled. “I always want to get better and do more. I’m very fortunate to be working; I try not to ask too many questions. I kind of just go with it!”

Co-starring with Neve Campbell, Chris Noth and Derek Jacobi on “Blood and Steel,” Zegers said working with the cast was “quite incredible.” Shot in and , the series centers on his character’s complicated life during the construction of the ill-fated Titanic.

“[Dr. Muir’s] a very strong-willed guy who wants to change the system,” Zegers said. “It’s a very old system that he doesn’t think is conducive to things moving forward. He likes to challenge authority; he’s very ambitious. I like that.”

Zegers revealed that he’s not exactly the type of actor who’s comfortable repeatedly watching his own movies: “‘Transamerica’ was definitely one of my favorites among movies that I’ve been in; I was 20 when I did that. I don’t really like to watch things that I do, to be totally honest.”

The actor now counts “Blood and Steel” among his favorite projects. He worked on the series for over five months, and found the experience very rewarding. “We worked six days a week, 14 hours a day,” he said. “Just the workload was a lot. Just being consistent every single day was a challenge. Over the course of half a year, people got sick, tired and grumpy. But as an actor you have to be very driven and consistent… This is what I’m probably most proud of in terms of what we accomplished. People will see this when they watch; it’s an incredible story to tell!”

I really loved this serie!!!
Was the character of dr Muir based on a true person of White star line?
Greetings,
Veronique Beauprez

Hi. The character is fictional. :)