‘Avengers Vs. X-Men’ shakes up the Marvel Universe 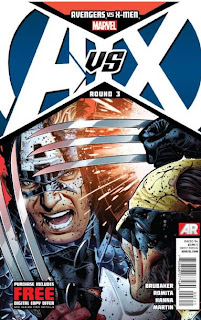 It was bound to happen. Marvel Comics’ two most powerful—and now most popular—super teams are being pitted against each other in an earthshaking, moneymaking miniseries event. “Earth’s mightiest heroes” and “the children of the atom” fight over a cosmic entity in “Avengers Vs. X-Men,” a biweekly, 12-part series running until September.

The two teams are fighting to control an earth-bound , an ancient being with power to eradicate planets. The Avengers go after the teen mutant “messiah” Hope Summers, the potential host. But the X-Men are keeping the other team from taking her into protective custody, believing that Hope can use the Phoenix to restart the mutant race, most of which was magically depowered by the ex-Avenger Scarlet Witch.

Co-written by Brian Michael Bendis, Ed Brubaker, Jason Aaron, and Matt Fraction, “Avengers Vs. X-Men” is the comic book event of the year for Marvel devotees, an epic crossover that will have a definite winner (although at this point, the victor is clearly Marvel; the main book is a hit and related titles are doing really well).

So far, the miniseries impresses with its big, foreboding confrontations, although there are some disappointing continuity inconsistencies with the tie-ins. The Avengers’ Helicarrier was attacked by Magneto and Colossus ( # 2), but in another book (New Avengers # 24), there are no signs whatsoever of that attack, and shows an entirely different scenario.
Five issues into “Avengers Vs. X-Men,” something totally unexpected finally happens, which will undoubtedly lead to more brawls and escalated conflicts between the super-groups.

It’s far from perfect, and knowing the whole story requires reading several other connected comic books. But whether you’re an X-Men or Avengers fan, or both, “Avengers Vs. X-Men” is good old-fashioned comic book fun, accessible enough for newbies, but more rewarding for longtime fans of the Marvel Universe’s premier teams. 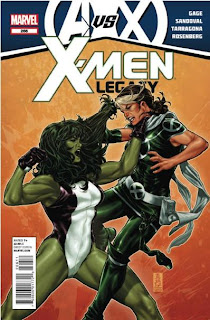 Aside from “Avengers Vs. X-Men,” there are tie-in titles worth reading, although some are quite repetitive.

“X-Men Legacy” – The X-Men’s new school is visited by three Avengers, eventually leading to conflict with Rogue and the other teachers. This and Christos Gage’s other must-read title “Avengers Academy” give depth and unexpectedly enlightening sides to the conflict.

“” – The teen X-Men from the mutant base Utopia are brought by the Avengers to the Academy grounds after the escape of Cyclops’ team. The presence of the former villain Sebastian Shaw complicates matters for Tigra and the other teachers.

“Avengers” – The continuity with another title, “Secret Avengers,” is confusing, as both comic books feature the same lineup. A team of Avengers is sent to space to stop the , while the alien Protector plans to betray his teammates during the mission.

“New Avengers” – The title’s first tie-in issue centers on Luke Cage’s decision to remain a member before the Avengers’ visit to the X-Men’s island. Subsequent issues reveal the intriguing hidden history of the , which contacted a human host many centuries ago, a red-haired, female Iron Fist.

“Secret Avengers” – The same characters from “Avengers” track and confront the entity; there aren’t fights with X-Men here, either. What’s interesting, however, is the appearance of a character claiming to be the deceased Avenger Captain Mar-Vell. 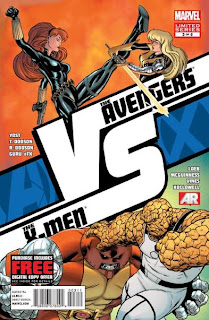 “Wolverine and the X-Men” – Wolverine, both an Avenger and an X-Man, is contacted by Captain and Cyclops at different crucial points during the war. The title also elaborates on Wolverine and Hope’s battle with host-hunting aliens, unmentioned in the main title.

“Uncanny X-Men” – The most powerful X-Men, the “Extinction” squad members, star in the book. Storm, Magneto, Namor, Colossus, and other mutants’ insightful thoughts on the hero conflict give perspectives that are otherwise unheard in the main miniseries.

“: VS” – Unapologetically plotless, the six-issue series focuses on the battles that “Avengers Vs. X-Men” couldn’t contain, giving fanboys and fangirls precious slam-bang moments and clear winners in one-on-one bouts. To date, the memorable battles include Black Widow versus Magik, Colossus versus Thing, and Iron Man versus Magneto.
Posted by OLIVER at 7:18 PM