‘The Healing’ and the hunted

(From the Sept. 1 issue of The Fortnightly)
By Oliver M. Pulumbarit

Interestingly enough, the official poster of “The Healing” doesn’t look like it’s touting a violent horror movie; those who haven’t seen the trailers or cast interviews can easily assume that since it’s a Vilma Santos-starrer, it’s most likely a relentless tearjerker about faith healing in the country.

Well, it isn’t. It’s good that the poster designers practiced some restraint and kept it spoiler-free. The faces of most of the actors are there, but they’re half-faded in the background, and they’re not immediately noticeable. 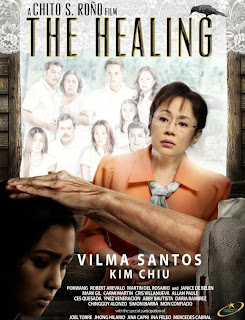 Directed by Chito Roño, “The Healing” is mostly a tightly told, if derivative horror flick that benefits immensely from a number of competent actors. emphatically plays Seth, the daughter of a stroke patient, Odong (Robert Arevalo). She brings him to a reputable faith healer, Elsa (Daria Ramirez), who miraculously cures him with a combination of inexplicable supernatural powers and a herbal concoction.

Word of Mang Odong’s unexpected recovery quickly spreads that Seth’s friends and neighbors—who either have debilitating or embarrassing maladies—hastily talk her into accompanying them to the healer. Her teen son Jed (Martin Del Rosario) has a seriously ill half-sister, Cookie (Kim Chiu), who also desperately asks for her help.

After their healing sessions, however, the miraculously cured begin having nightmares and, one by one, they begin exhibiting odd behavior, which is almost always witnessed by a befuddled Seth.

“The Healing” ably presents a discomfiting but recognizable reality; it establishes the familiar presence of the faith healing scene and phenomena, which are questioned by a vocal skeptic (Allan Paule).

But because it’s a supernatural horror flick, it doesn’t really focus on the mechanics of the unexplainable. It utilizes familiar mythologies’ take on life and death, as well as on steep prices for quick fixes, and does so inventively.

As for scare tactics, the plot devices and scene structures aren’t anything you haven’t seen before. It typically has its creepy-crawlies that slide across shadows when characters aren’t looking, and the chronology of certain events leaves little for genuine shock. There are gory parts, which succeed in grossing out and jolting the viewer for longer periods than necessary.

Still, like their more popular Asian horror bogeyman kin, the antagonists here look freaky. Excellent effects make them spine-tingling, although there are also instances when the more flashy digital effects look clunky, such as when figures “vanish.”

Anyway, the actors collectively add to the atmosphere of escalating eeriness. Aside from the aforementioned , Janice De Belen, Pokwang, Cris Villanueva, Ces Quesada, Joel Torre, and Ynez Veneracion manage to conjure up disconcerting and disturbing moments that overpower the sickly components of “The Healing.”
Posted by OLIVER at 11:11 AM