Its glorious, glistening visuals captivating through most of its two-hour running time, “Life of Pi” is Ang Lee’s latest sojourn into the soul, profoundly telling a survivor’s tale of turmoil and triumph. 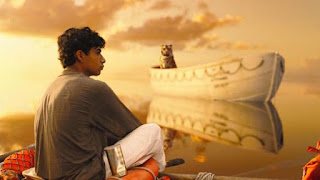 Suraj Sharma memorably portrays Pi Patel, a young Indian shipwrecked with a zoo animal owned by his family, the oddly named tiger Richard Parker, which found itself sharing the same lifeboat during a thunderstorm.

“Life of Pi,” based on the bestseller of the same title, is tremendously illustrative, a somewhat bizarre twist on Mowgli’s adventure and feral pet movies, pitting the harried protagonist against an uncontrollable force, but eventually centering on the forming bond between both the isolated man and beast.

Pi’s unique story is marked by existential musings, from his inquisitive religion-hopping during his childhood, to his desolate days at sea. Does the tale make one believe in God, as his older, narrating self (Irrfan Khan) suggests?

Not necessarily. It’s the part of the film that’s quite hazy. Pi’s incredibly Job-like travails has its “miracles,” sure, but the character’s comprehension of the tragedies he experienced doesn’t paint a good picture of a benevolent or overseeing deity, whichever he may be alluding to. If anything, it comes off as survivor’s guilt, coupled with misdirected gratitude.

But as for the truth-versus-perception theme that manifests much later, interesting points are raised. “Life of Pi” may not inspire soul-searching for those who don’t buy into the faith aspect, but it will make them appreciate the film’s mostly lush storytelling and its ponderous emphasis on versions of reality, aside from Pi’s majestically realized ordeal.
Posted by OLIVER at 3:55 PM