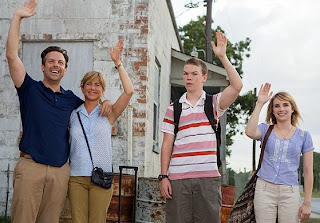 The adult-oriented comedy “We’re the Millers” routinely milks its stoner comedy-dysfunctional family themes, but despite its formulaic nature, it’s still hilarious at the right parts.


Jason Sudeikis plays a “nice” drug dealer tasked with smuggling a sizeable amount of marijuana out of Mexico; he hires a broke stripper (Jennifer Aniston), his geeky neighbor (Will Poulter) and a surly runaway (Emma Roberts) to pose as his vacationing family. The pretenders typically make friends and enemies along the way, their precarious situation expectedly transforming them into a closer, more family-like unit.

Directed by Rawson Marshall Thurber (“Dodgeball”), “We’re the Millers” is understandably and riotously risqué but predictable. The faux family concept is stretched to accommodate pretty much all the possible scenarios, sometimes accompanied by gross jokes and physical humor. So while there’s Aniston providing some sexiness, there are silly moments involving deformed genitalia and other “unreal” situations. It’s pretty lowbrow, but “We’re the Millers” doesn’t pretend to be more than that, and it still amuses. The few outtakes shown during the end credits are funny, and that particular prank on Aniston is cute.
Posted by OLIVER at 10:49 AM