Nude castaways are challenged to survive in the wilderness, forced to rely on their wits and a few crucial objects in the Discovery reality series, “Naked and Afraid.” Two strangers are partnered and evaluated before and after they embark on their three-week survival journey—there is no cash prize, but those who survive it are rewarded with “pride and a sense of accomplishment,” according to the Discovery website. 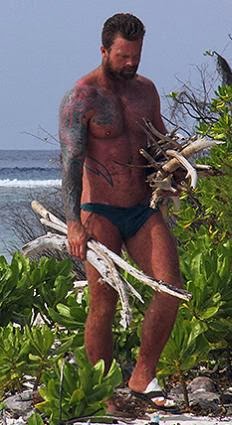 Sans clothes, the “survivalists” are marooned and tasked with making the most of a given location. They are accompanied by a camera crew but are given their own recording devices. Should the pair decide to quit for whatever reason, they can be taken off the location by the crew.

The episode “Island From Hell” epitomizes the way an unexpected environment can pinpoint the vulnerabilities of normally strong individuals. Jonathan Klay is a former Marine and bodyguard, while Alison Teal is a surfer and frequent traveler. Immediately, Jonathan is almost incapacitated by the heat, his body getting heavily sunburned just a few hours after his arrival on a small island.

This makes Alison take over, whipping up a makeshift minishelter and foraging for food for herself and the reeling, immobilized Jonathan. Eventually, he is well enough to help out and digs up an area for potable water. Impatiently, he drinks the   unboiled water but later has to deal with the disastrous and embarrassing consequences!

Alison, while strong-willed, is tested when she experiences pain brought about by her monthly cycle. The isolation also affects her during this vulnerable period.

A producer denies that the show is “exploitative” but the title does get people curious. Certain body parts are blurred accordingly and the uninhibited castaways sometimes wear pieces of clothing that they discover at the locale.

As a “survival” series, “Naked and Afraid” adequately shows the importance of resourcefulness and practical skills, while reiterating that unexpected factors can just as easily render its subjects inactive or uncooperative.

Transformations are jarring, as drastic weight loss and a generally unkempt, desperate appearance marks the end of the survivalists’ grueling adventure. Nevertheless, there are lessons to be learned on teamwork, planning and practicality.

For a show that takes place in a span of several weeks, only the most important events are encapsulated in hourlong episodes. It rapidly shows the changes in the participants’ bodies and behavior, while singling out the necessary developments.

(“Naked and Afraid” airs Wednesdays, and on Discovery.)