Runaways creators Brian K. Vaughan and Adrian Alphona’s decision to leave the monthly comic book was surprising and saddening. told Newsarama last week that they wanted to leave on a high note, and do other projects after almost four years on the successful, fan-favorite project. But many fans, me included, are happy that Buffy creator Joss Whedon will be taking over. Whedon admitted in another interview that he’s a fan of ’s, and Runaways is one of his favorite titles. He also shed a “man-tear” over issue # 18, where one of the mostly-teen team’s original members died.

Well, he’s the right guy for the job. His creations Buffy, Angel, and Firefly are evidence enough that he’s capable of different voices and creative character dissection. I also have high hopes for the Wonder Woman movie, which he’ll be directing soon. Wow. Can’t wait to read his take on the Runaway characters; I’m excited for them, and a little afraid that they’ll be experiencing some tough challenges soon. I’m enjoying Joss on Astonishing X-Men too, and I especially like his handling of the now-grownup Kitty Pryde and uber-X-bitch Emma Frost.

Rachel Summers versus the Beyonder 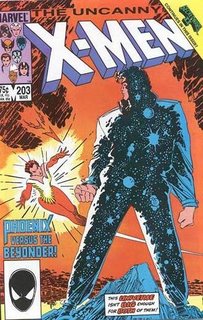 Speaking of Marvel’s mutants, I’ve been arranging all my old, yellowing X-Men, X-Factor and New Mutants comic books. Benedict borrowed my Morrison New X-Men issues and a couple of random old Uncanny X-Men’s. He’ll be borrowing the rest of them eventually, so I taped up the tattered, loosely bound ones. Like the Runaways, the X-Men and its extended family were heroes that I really cared about, albeit only during specific eras. ’s long ‘80s run and Morrison’s 3-year stint were mostly exciting for me. The soap opera elements were nicely bound to the book’s themes of alienation and moral debates. There were times when the plots and bigger story arcs got way too muddled, and some subplots were never fully addressed, but the characters stood out nevertheless.

The aging newsprint now has a graininess that feels weird on the fingers, but I didn’t really mind it when I re-read a number of the comics. I always liked the pre-Morlock Massacre lineup (a powerless Storm, Rogue, Wolverine, Shadowcat, Colossus, Nightcrawler, Magneto, Phoenix II) and the martyred “Legends” team (which was composed of a repowered Storm, Havok, Dazzler, Rogue, Colossus, Longshot, Wolverine, pre-ninja Psylocke, and Madelyne Pryor). I was always fascinated with the Jean-Scott-Maddie triangle, which was drawn out for years until it was finally resolved in the “Inferno” crossover. I was shocked at the brash cruelty of the Marauders, which I still consider the team’s deadliest enemies. I’m reminded that I really liked Rachel Summers’ drama (“I’m from a future where you’re all dead and I helped hunt my kind!”) before the whole thing became too convoluted to follow (Cable! Stryfe! Askani!). I didn’t get what Cameron Hodge’s beef with his ex-friend Angel was when I was a kid, until I found out last night that it was an if-I-can’t-have-you-then-no-one-will scenario (X-Factor # 34). Well.

After all these years, the characters continue to experience change. Professor X now has a closet full of retconned skeletons, which seem to get exposed every few months (Cassandra! Danger! Vulcan!). The students are now teachers, but Cyclops is still occasionally messed up, and arguably a consistent ass. After leaving his then-wife Maddie and child to hook up with the resurrected Jean, Scott would later marry and cheat on Jean with Emma.

The X-Men, as characters, will always have flaws, but they make them interesting, if and when done right. The old stories have renewed meaning to me now, especially those that show them at their bravest (the Beyonder was omnipotent, but it didn’t stop them from arguing with him until they made sense to him).

They still champion mutantkind, which, in the real world can easily be the minorities, the oppressed, and the rejects, which is why they’ll still appeal to generations of readers to come.

Okay, speaking of mutant champions (hehe), Danton Remoto of Ang Ladlad texted me this announcement: “We’re filing our papers w/ Comelec this Friday, , Intramuros, . Am inviting you to join us and give moral support to this historic moment. Sorry for the late request. Comelec announced deadline only recently. makadaan kayo. Tapos ito in 30 minutes. Thank you po.” 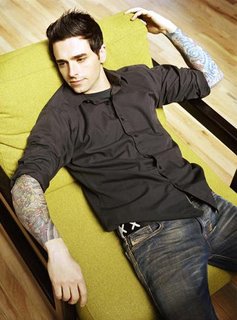 I’m resting now and catching up on some Firefly episodes and old borrowed comic books. Also, I’m playing with and posing my new Young Avengers action figures (an awesome foursome, but Patriot’s left wrist is super-limp). The Marvel Monsters set has arrived, too. They look great, although I don’t really care for the characters, except Dracula and Jack Russell-Werewolf. Crap, I need money; the Mojo–ML set is bound to pop up any time now.

Also bought some old Dashboard Confessional albums. Man, I’m digging Chris Carrabba’s music. I have three albums now (“MTV Unplugged”, “Dusk and Summer” and “Swiss Army Romance”) and I can’t wait to get the one with the special DVD of DC’s live performance with REM. His voice in the older, acoustic guitar-accompanied stuff kinda sounds like Placebo’s vocalist, and sometimes James’ and a little Gene Loves Jezebel’s. He sounds The Cure-ish in some songs in the latest CD; not that I think he’s mimicking, I just am discovering his range, and it’s easier to describe it with points of comparison.

His lyrics contain a youthful energy and almost Lilith-esque sensitivity that captures the poetry of love, heartache, longing and discovery. He’s honest and intimate, but not vulgar. Well, personally, it’s like he’s singing some of the unwritten songs in my head. For me, many of the songs conjure up and flavor ruminations of "wow I’m having sex like there’s no tomorrow and I'm becoming one with the universe and the only thing stopping me for a few seconds is spitting out strands of you-know-what and it’s a contemplative and lifeshaping experience". But that’s just me. Nicey.

I'm also enjoying reading X-men lately, whenever I get a chance to get my hands on them :)

Been hearing good things about the new writers on Uncanny and Adjectiveless too. Might be worth checking out, also. :)

personal details are what i most look forward to in this blog. =)

Hey Eon. Really? Hmmm... okay. But I don't really get why people would be interested in that, heheh... I mean, I'm not an interesting person... ;)

those tattoos on his arms. they are real?

Yes, I believe they are, Max.