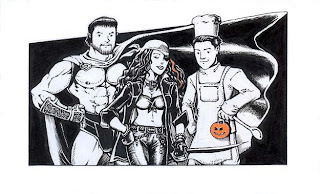 I’m feeling much better. Except for some strange sensation caused by a swollen gum behind a lower molar, I’m recovering quite nicely. I’ve been able to catch up on work this past week--thankfully, some surprise freelance jobs were easy to do--and I also finished drawing Dicky’s story two days ago. I’m quite pleased with it, and I’m hoping that he and other people will like it too.

It’s Halloween once again, so there’s that new LNA drawing up top. I wanted to dress up Argus in a Transformers-inspired costume, but I opted for a less obvious costume choice. I loved Ratatouille; I’m enjoying Kitchen Confidential, and I wish that I was able to watch No Reservations. So I thought that dressing him up as a chef would be timely, and a little cool.

It’s way easier to have these old creations act out some fantasy situations and be my fearless mascots or avatars for All Hallow’s Eve. I’m not into the parties, and I’d probably take a lot of convincing to wear an actual costume. Well, the closest thing to wearing one would be when I had to be in business attire for an assignment last September. I considered wearing something for this year’s Halloween, but as I’ve things to do and no time to really attend events, I’m just gonna celebrate it by buying and eating candy. Yay, candy!

Oh, I just remembered: ten Halloweens ago, Dhampyr, a horror comic book that a friend wrote and I drew, was launched at Synergy in Glorietta. Wow, it’s been a decade! I can remember parts of that fun event. Things were totally different for me then. It was a project that I poured a lot of energy into, but looking at it now, there are many things that I wish I’d done differently. Still, back then, the Halloween launch-costume party was a successful, exciting one. If the graphic novel had a soundtrack, writer Dave H. suggested that Sugar Hiccup’s haunting “Five Years” would be perfect for it.

Anyway. I love this time of the year, also because I get to eat sweet, sweet cake. At least I’m hoping that there’s one for me this year. 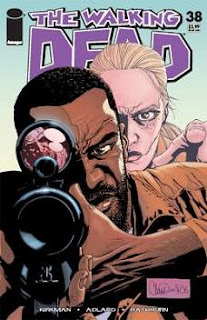 Robert Kirkman and Charlie Adlard’s The Walking Dead remains one of the most consistently engrossing comics series out there.

Threatened by countless hungry zombies, a small group of survivors do their damnedest to look for fellow humans and fend off the undead predators. But in this world, some people are actually worse than the monsters.

The book’s protagonists, Rick, a former cop, his family and newfound friends start forming some semblance of society from scratch, while constantly evading threats posed by the zombies and other human “tribes.” After 42 issues, the cast has continuously grown and thinned; some characters lived, others perished (often violently), and the harrowing ordeals never seem to end.

Kirkman’s strengths here are his dialogue and characterization. Characters grow on you, and you actually worry for them. The interactions are superbly written, even when the story gets paced rather slowly at times. But some unexpected twists and intensely executed moments keep you glued. Adlard’s art and storytelling skillsr have also improved considerably after the original artist (I forget his name at the moment) established the look of most of the characters and the mood of the series. Cliff Rathburn’s gray tones enhance and texture the illustrations nicely, as well.

The Walking Dead is humorless, bleak and occasionally, genuinely scary. If you’re looking for a funnier Kirkman, his twisted take on superheroes turned monsters in Marvel Zombies (or its sequel) could probably be the title for you. But those Walking Dead trade paperbacks really are worth getting and devouring.