I’ve seen much reality-altering lately, from the derided sudden dissolution of Peter and Mary Jane Parker’s marriage to the enjoyable time-jumping missions of Dan Vasser in Journeyman. Also, a book Dicky lent me recently, Good Omens by Terry Pratchett and Neil Gaiman, had a character that was able to change reality instantly.

But back to Spidey and Mary Jane.

Much has been said about the controversial “One More Day” arc in the Spider-Man titles, where the hero makes a deal with Mephisto to save the life of his Aunt May. Admittedly, reading readers’ reactions and the involved creators’ explanations has been quite amusing. I don’t doubt that the whole situation’ll be retconned someday a la the “Clone Saga,” but for now, Pete’s single again, broke, and has kept his costumed identity a secret. Mephisto, instead of taking his soul, took his marriage to MJ (and the memory of it), instead. Wow.

I really dislike that everything was magicked away just like that. It was yet another example of fixing something that’s not broken, of returning to a status quo that had run its course back in the ‘80s. I liked that Peter and MJ belonged with each other, and that his superheroic life was something that she accepted, something that she and May eventually became proud of. The rush to undo and erase that relationship, along with other significant changes like the Civil War unmasking, was just laughable.

The characters should’ve just divorced. At least they’d have moved on to new chapters of their lives naturally. Sure, there’s baggage, but dealing with and surviving it has always been what Peter Parker’s about. It would’ve been an eye-opening acknowledgement of failure, a mature step that would allow them to develop separately. The magic quick fix just came out of left field, and is just insulting to those who followed the character’s mythology grow and evolve gradually all these years. How this affects Peter’s relationship with his trusted Avengers teammates is also unclear, because it’s doubtful that it’ll be addressed soon.

But again, I’m confident that some future creative team will restore what was voided out of existence. Maybe Mary Jane will be back for good one day, along with their long-lost baby, rescued from the clutches of Norman Osborn. Maybe the characters will realize how selfish and idiotic that drastic reality change was. Maybe Peter Parker will finally get to the next phase of his everyguy life, and accept the burdens that come with it.

I’m not holding my breath. But it’s just a matter of time. Things’ll be back to normal, however that word’s defined in Spidey’s world. 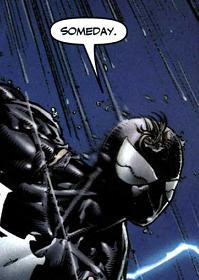