Unpublished 2005 interview. I did this a separate piece; my other more gay-centric interview with her appeared in the Feb. 2006 issue of Icon magazine. Reader discretion is advised. Photo by Benedict S. Bartolome

She’s as straightforward, eloquent and kinetic as ever.

After over a decade of enlightening inquiring minds since becoming a TV personality and newspaper columnist, beloved sex therapist and clinical psychologist Dr. Margie Holmes is still busy with teaching and talking through different venues. She is currently writing her 18th book and a daily Abante advice column, as well as teaching Spirituality and Psychotherapy over at UP Diliman. The super-shrink took a breather and, for once, sat back and therapeutically spoke about her different worlds in her home.

How does teaching Spirituality and Psychotherapy relate to your teachings about sexuality?

When I started, sexuality was a rarely talked-about topic. People avoid it and all that, which was quite foolish because we are all sexual beings. I think I feel the same way about spirituality at the moment. It relates because now, maybe because of my age, I started to feel the need to explore the spiritual side of my life. I think, like sexuality was in the ‘80s and ‘90s, spirituality is also an area that people feel very uncomfortable about. Some have very rigid definitions of what a spiritual person is. And I am hoping that in some way, I can contribute to a less rigid view of what it means to be spiritual. Like sexuality, all of us are spiritual beings. If we are, say, atheists or we don’t believe in a higher being, it is still part of our spirituality that we are atheists. It’s like a person who’s celibate; he still has a sexual persona as part of his sexuality. 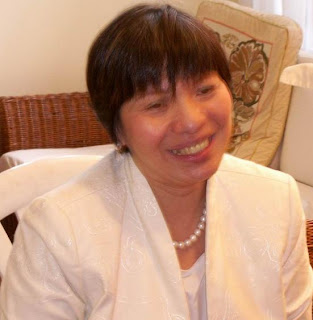 So, does being open-minded equate to not believing in any higher power?

No, much to my husband’s dismay. I think my husband (Jeremy Baer) is agnostic. He thinks I’m superstitious! That’s because I like to recite some of the prayers that we used to say when we were young. Not that I think that saying these prayers will help, you know what I mean? I feel comfortable. I’m used to it. I force him to, but we also pray, using our own words.

What significant changes have you noticed in Filipinos’ sexual behavior in recent years?

The fact that one can get information from the internet very easily is a good thing. But we still have to verify if things are accurate or not, if the people who say things have an agenda or not, etcetera. The idea that information is readily available helps. The youth now are much savvier in that sense. With the different communication systems, like texting and all that, it’s easier to meet other people. But in terms of dealing with the dynamics of the relationship, it is just as difficult, or sometimes even harder! Being able to text or eyeball someone may give the illusion that one is very close. It takes time to know a person.

What do young people need to know about sexual relationships now?

I think unless our educational system or the parents can teach adolescents how to think rigorously and logically, the same issues are there. Some advice columnists are still as moralistic and still as illogical. Even though more is available, the capacity to discern still has to be emphasized. Filipinos, they’re more superficially open. I think, in terms of things that really concern them, they are still very private, which is a good thing too. They may have more relationships at a younger age. But the relationships are not necessarily deeper.

They’re not necessarily safer, but I am glad that some government officials are more concerned about giving sex education to the youth. However, other government officials still refuse to have the health centers provide condoms and birth control. Whatever the moral stance of the person in charge is, this is what is followed. Until people are outraged by this, not much has changed! We’re just lucky that one or two people think that it’s okay. There are more conscious attempts to make sexual health part of our curriculum, our consciousness, so that now, a lot of people think that sexual health is an important thing.

Can you expound on the reality of promiscuity among Filipinos?

I’ve seen more men being able to do it than women. I’ve seen women also able to do it. I think it helps when you’re younger and more resilient. Whereas if you’re older, it might be a little more difficult; the potential for damage, for hurt, is more. All things being equal, if it’s a f—k buddy, a lot of it has to do with looks and sexual attractiveness. Let’s face it: a 20-year-old woman or man is far more attractive than a 70-year-old.

You wrote in your new book “A Different Love: Being a Gay Man in the ” that sexual orientation can change. How often does it happen?

Orientations can change. But I have not seen any real change through therapy. A lot of studies show that people change naturally; they fall in love or they don’t. They fall in lust or they don’t. But it isn’t usually through therapy; some people would say, they have modified their behavior, but the longing is still there. There are some people who are exclusively heterosexual or homosexual, and do not change throughout their lifetime. In fact, I would think that the majority of people would be like that. A lot of the studies seem to say that usually, 10 percent of any given population is gay, no matter how oppressive or open the culture is. Which is sort of like a clue that it may not just be cultural, kasi, if the culture is more open you would think there would be more gay people around. I’m sure there will be other studies.

It would be nice if more people came out. Bernardo Bernardo is out. He can be funny, forceful and gentle. I’m trying to think… who are the other gay role models? Because the others don’t really come out.

How repressive is our culture in that regard?

It’s difficult because they have no role models. If you grew up where your own parents don’t talk to you about sex, you don’t know what to do. My daughter Alexandra asked me some questions. Some, but not all. I’m sure that she’d much rather get answers from other people. Communication’s really important.

On the subject of mental well-being, what do you think of some detractors’ allegations against psychotherapy?

Generally, there is a lot to be said for psychiatry and psychology. They have done a lot for people who are depressed.

How does a person stay sane, exactly?

To be able to adapt to the world is getting more and more difficult, especially with things happening in the . It helps to have a reasonably logical mind, to not be completely self-absorbed, to have a few friends or family for your support system, to know how to deal with stress levels. A well-respected medical journal said that a lot of times, self-forgiveness is more important than self-esteem.

How would you define a healthy sex life?

Being able to enjoy sex. Not insisting on intercourse if you, say, don’t wanna get pregnant or if the person doesn’t want it. I think a healthy sex life also appreciates that there are more erogenous zones than the genitals. It does not insist that everyone should be married before they enjoy it, although their own personal view might be that way. A healthy sex life appreciates that people change as they get older and it would be nice if these changes were taken into account.

Do many people still think that pleasuring oneself is sinful or wrong?

I’ve met so many religious people who don’t fuss so much about self-pleasuring. In fact, it’s something that I would recommend rather than having a one-night stand with somebody you don’t know. Sometimes it can be more fun! You’re in control of the rhythm; you’re in control of the pressure, ‘di ba? Mas mura pa!

ey oliver!! glad you posted this interview with margie holmes. i love her column. :)

You're welcome. Glad that you enjoyed it. )