Archie Meets the Punisher is surely one of the strangest inter-company crossovers ever. Back in the ‘90s, team-ups between comic book characters from opposite sides of the comic book spectrum were pretty regular occurrences. But there were those that still stood out as wonderfully weird. 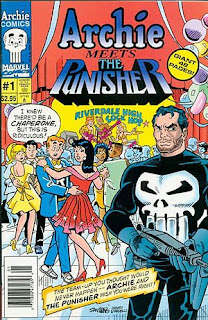 The contrasting worlds of the two characters from different genres collide in this story written by Batton Lash. The wholesomeness of Riverdale meets the Punisher’s grimness, and surprisingly, it works. The writer and art team found middle ground; Archie’s world temporarily became a tad dangerous, and the Punisher’s actions didn’t have the usual ramifications.

As a character pointed out, it was fortunate that nobody got hurt by all those stray bullets when violence erupted during a party. There were other rib-tickling moments that didn’t normally happen in the respective titles. And it was also a nice touch to have good old Ms. Grundy crushing on Frank Castle, who falsely introduced himself as the new PE teacher. 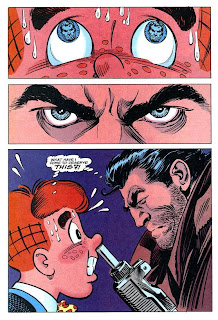 Ah, the magic of comics.