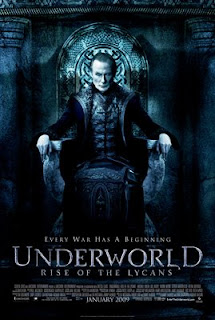 The series expands with a prequel that doesn’t look cheap, and one that’s actually quite cool, giving some dimension to the monster war of the two previous fantasy-action flicks. The beginning of that ages-old conflict is told rather decently, even if the tale itself is simple and not exactly anything new. While the movie isn’t about Kate Beckinsale’s ass-kicking character, it expounds on its other nocturnal creatures, and introduces (and re-introduces) important ones. The forbidden love of vampire council member Sonja (Rhona Mitra) and wolfman slave Lucian (Michael Sheen) won’t be a secret for long, and it threatens to undermine and humiliate the leadership of Viktor (Bill Nighy), her stern father. It also threatens the old, vampire-established order, but the eruption of beastly chaos is inevitable.

Battles are fought, and an eternal enmity is spawned. The battle scenes have appealing choreography; “The Matrix” is mimicked in the sense that there are some nicely angled action poses where swords and crossbows are stylishly, menacingly brandished. Some scenes look inspired by the “Lord of the Rings” and the “Narnia” movies; the battlefield-scale effects, depicting savage fights between werewolf and armored vampire armies, are quite impressive. “Rise of the Lycans” is barely an hour and 20 minutes long, but it quits while it’s ahead and ends competently enough.

The movie is currently showing at Metro Manila theaters.