Remember when Wolverine stabbed Rachel Summers/Phoenix in the chest to prevent her from killing the Hellfire Club’s Selene? That was way back in Uncanny X-Men # 207. Back then, he stood firmly by his actions, reasoning that hers were extreme and unbecoming of a superhero:

“But this, Rachel… this is murder. Justify it--rationalize it--however you like, it’s still wrong. It isn’t worthy of you--as Rachel or --and it sure as blazes isn’t worthy of an X-Man.”

He added, “We call ourselves heroes, girl--that means we have to stand for something, no matter how hard or how much it hurts. We represent the dream… we have to play by the rules.”

Wolverine doesn’t hide the fact that he’s killed before, and expects to kill again when it’s unavoidable. When he and Rachel met again many months later in Madripoor (X-Men Annual # 14), he unspooled a long speech that convinced her and a grown-up version of Franklin Richards to avoid crossing that line.

But these days, he doesn’t seem to have a problem with killing again. The panel below is from Wolverine Origins # 29. After brutally attacking and killing some Hellfire Club goons, he justified his actions to X-Men founder Professor X: 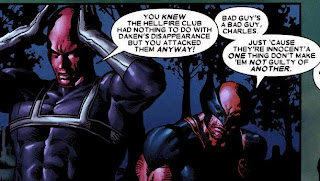 “Bad guy’s a bad guy, Charles. Just because they’re innocent’a one thing don’t make ‘em not guilty of another.”

Well, it can be argued that the world has changed; mutants are now nearly extinct and the race is at war with its many powerful tormentors. His memories have returned as well, revealing that he’s killed a number of people before joining the X-Men. As current leader and member of X-Force, doesn’t hesitate and feel any guilt; he guts and executes enemies that threaten the last remaining mutants on a regular basis. Maybe it’s justified. Cyclops and the strike force are getting their hands dirty these days, because that’s how harshly the world has changed.

So does still consider himself a hero? Or has the definition of the word changed too? He’s a soldier, surely, but now that he thinks and acts differently, he’s in no position to speak about the sanctity of life or superheroism.

If anything, Rachel Summers learned to not abuse her great power after the “intervention.” But had she been there when he said that “Bad guy’s a bad guy” speech, he’d have gotten an earful.

And maybe, some telekinetic talons to the chest.