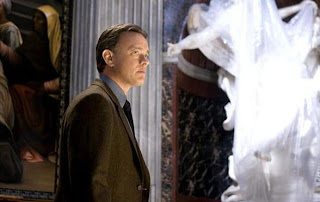 Save for one scene involving a papal candidate’s combustibility, it becomes difficult to get involved with the simultaneous problem-solving and rescue missions. There’s a twist you can see coming from miles away, and from time to time the movie feels like it’s trying to unruffle some feathers.

It’s not totally tedious; Hanks delivers, as does Ewan McGregor, who plays a Church official alerted to the vengeful machinations of a revived secret society.