How the Mighty Have ‘Fallen’ 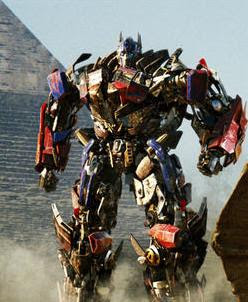 (Thank you, Rita Obanil and Stratworks, for the tickets. Some spoilers ahead.)

"Transformers: Revenge of the Fallen” is a big, loud sequel with a few cool parts and more than its share of WTF moments.

The good parts? Shia, Megan, and a few action scenes.

1. Many of the Transformers still have overly detailed designs, so it gets difficult to figure out who’s talking, and who’s doing what in scenes that show more than one robot. Optimus Prime, for example, looks like he’s got a zillion tiny flecks for parts; it’s hard to discern (a) if he’s hitting a similarly over-designed enemy with his fists, and (b) where that blow connects, if he is. At least Bumblebee and the Twins have clearly defined shapes and prominent colors.

2. Several Primes had to sacrifice themselves to create an easily penetrable chamber for the Matrix. No serious security measures or booby traps. The Matrix supposedly cannot be just found; “It must be earned.” Then the Fallen, the most unworthy of all Transformers, just snatches it from Sam Witwicky.

3. Mikaela lets her leg get humped by a small Decepticon. “At least he’s loyal.”

4. The Autobots don’t have an official interim leader in case Optimus Prime bites the dust. And they were just depending on the possible resurrective properties of the Matrix.

5. We really did not need to see John Turturro’s butt.

6. Optimus’ “corpse” wasn’t put on the ground gently by the humans; he had to be unloaded from midair in an undignified manner.

7. Decepticons can transform into humans, but they only thought of placing one “fembot” near their target.

8. Suddenly, Sam Witwicky has been destined for greatness all along.

9. The revived Prime gets extra parts and weaponry, but instead of looking impressive, it looks like he’s got junk haphazardly clumped on him.

10.You’d think that the Decepticons would have a brilliant plan, like relentlessly attacking the Autobots (and their allies) at different fronts while they were leaderless. Instead of taking advantage of Prime’s temporary death, they showed a lack of strategy and military tactics, and didn’t even put up an impressive fight in Egypt. They just depended on the Constructicons to swallow whoever got in the way. Overconfident fools.