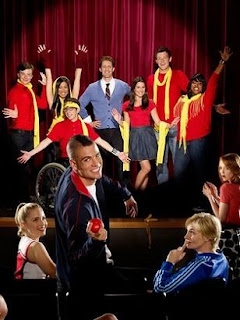 IN the first 13 episodes of fan-favorite comedy-musical series "Glee," the ups and downs of teen life translate into melodic mash-ups and energetic covers of recent and classic pop-rock favorites, as sung by the unpopular but gifted glee club New Directions.

The weekly series created by Ryan Murphy ("Nip/Tuck") continues to click with music-loving youngsters and grownups alike, recently winning a Golden Globe for Best Television Series (Musical or Comedy), and a Screen Actors Guild award for Outstanding Performance by an Ensemble in a Comedy Series.

New Directions' beloved underdogs aren't an ordinary bunch. While some of its members may not belong to the with-it cliques--and some of the once-popular have become outcasts by osmosis--the group is undeniably talented, and is continuously motivated by the indefatigable teacher Will Schuester (Matthew Morrison).

Menaced regularly by cheerleading coach Sue Sylvester (Jane Lynch), the young singers have survived her sneaky acts of sabotage, and even won the sectionals.

But the victory is short-lived. In the eagerly anticipated new episode, new love interests and rivalries are introduced, while the members of New Directions face the recharged villainy of Sue. Diva-in-training Rachel (Lea Michele) meets a similarly ambitious singer, Jesse (Jonathan Groff), from a rival group. Meanwhile, the other kids are still disrespected by the mean girls and bullies, but continue to prove themselves in show-stopping song-and-dance numbers.

While the Will-Sue feud has escalated and gotten quite tedious, the young misfits' all-too-familiar drama--from self-worth issues to romantic entanglements--continues to inspire pop, rock and R&B renditions that audibly flavor every episode. From timeless tunes by The Doors, Cyndi Lauper, John Lennon and Madonna, to hits by Beyoncé, Avril Lavigne and Rihanna, the song selection provides a rich, evolving soundtrack that transcends generations. An episode devoted to all-original music is reportedly in the works.

In this era of instant gratification and changing perceptions on stardom, "Glee" reiterates the importance of hard work, creativity and teamwork. The show is already a unique platform for arts awareness; hopefully, upcoming storylines will be approached more inventively. The production numbers continue to improve, and it's only a matter of time before the show truly pushes the envelope.