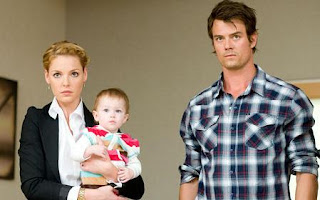 Holly and Messer (Katherine Heigl and Josh Duhamel) loathe each other, but they “inherit” their mutual friends’ baby (and house), so they have to learn to coexist peacefully and become replacement parents. Maybe they’ll even enjoy each other’s company eventually. Of course they will; even if you didn’t see the trailer, it’s a given that they’ll fall for each other in true rom-com fashion. The end.

Well, not quite. “Life As We Know It” is a heavier-than-usual romantic comedy in that the two potential lovers suddenly have to undergo radical lifestyle changes, mature almost overnight, and understand previously unheard-of responsibilities. Actually, much of the comedy comes from the assemblage of wacky neighbors. And the romance part? It’s actually iffy; the first time Holly and Messer got really intimate was after she accidentally got his bike destroyed, so there’s guilt and indebtedness involved.

But yes, despite the unusual circumstances, it doesn’t always feel that it’s a forced pairing. It’s not quite a regular date movie, though. Sure, it’s cute, seeing hot single people hit it off after much struggling, but the new parents’ complicated situation keeps reiterating that raising a child is a tough and serious job. Parents might be able to relate to it and the sacrifices depicted. It sort of forewarns younger couples, so it’s probably helpful in that regard, but it’s not a regular feelgood romance-fantasy. One may feel a little drained after watching it; it almost feels as if you helped the protagonists raise the child from scratch as well, a rewarding but exhausting experience.