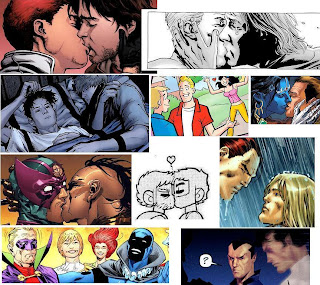 Okay, some spoilers ahead. Some of the notable gay characters and scenes of the year, clockwise from upper left:

Rictor and Shatterstar talk about their relationship. The longtime lovers and bisexual X-Factor teammates finally discuss their complicated romance.

Aaron and Eric reveal themselves. These new Walking Dead characters share a kiss after surviving a traumatic encounter.

Krishna and Jerry Craven get smoochy. This one came out of nowhere, an odd but touching gesture from the final issue of Supergod.

Creote’s feelings for Savant are disclosed. They had some help from Oracle, who called Savant an “idiot” for not seeing the obvious.

Hercules is outed as bisexual. And he had a secret fling with Northstar.

Daken plants a wet one. Wolvie’s manipulative son makes his fellow Dark Avengers uneasy, especially Bullseye, and surprises him with a kiss during the Siege.

Young gay Avengers return. Billy and Teddy are still sweet, and they do sleep in one bed, as seen in that wholesome image.

Kevin Keller debuts. Clueless Veronica doesn’t know his preference, and Jughead doesn’t feel like telling her about it.

Stephen Stills is gay. He and Joseph are together, and the revelation stuns Scott Pilgrim.