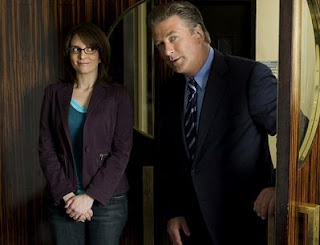 Fey is still brilliant as self-deprecating but motherly Liz Lemon, head writer of a sketch comedy series and often the butt of immature jokes. The rapport between Liz and her network executive friend Jack (Alec Baldwin) is still being explored properly, their close platonic friendship is a likeable paradox that creates inspired comedic situations.

“30 Rock’s” potential gets further realized with every season. Its characters get themselves repeatedly involved in fiascos during the creative process. A specific theme translates riotously throughout every episode, but some things remain constant: Liz has to balance her personal time with her work duties, but she often experiences the blurring of both. She sees to the needs of her spoiled stars, Tracy (Tracy Morgan) and Jenna (Jane Krakowski), both prone to making bad career moves.

The previous season was characteristically star-studded. There were appearances by “Mad Men’s” Jon Hamm (Liz’s dumb ex-boyfriend), Matt Damon (Liz’s pilot boyfriend) and James Franco (who played himself, but obsessed with a “body pillow”). The involvement of those guests enhanced the hilarity; Julianne Moore appeared as one of Jack’s girlfriends in a subplot that wasn’t as funny as the show’s other relationship arcs, but it was still quite watchable.